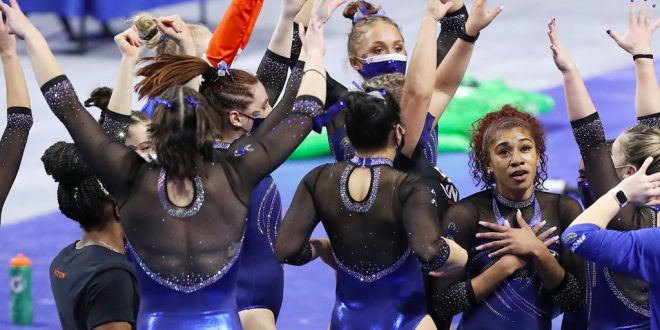 It is safe to say that the SEC Championship did not go as planned for the Gator gymnastics team. A third place finish behind LSU and Alabama was clearly a disappointment, but the team’s next meet will be able to wipe away all of the question marks that the competition in Huntsville created; the NCAA Regional in Athens, Georgia. Entering the competition as the top overall seed, Florida will have a chance to get their season back on track and qualify for Nationals this weekend.

“It really takes that hunger and that strive to be better than you were yesterday, every single day, to be where you want to be.”-Junior Leah Clapper

At the SEC Championship, things started off according to plan; their vault score wasn’t a season-high, but it was a solid score of 49.350. Once the team transitioned to bars, though, things began to fall apart. One poor event can kill the confidence of the gymnasts, so moving on from mistakes will be crucial to succeeding in Athens.

“After vault, we were in a good mindset,” junior Nya Reed said. “Then bars happened, and it was like, ‘Can we win?’ and that shouldn’t have been our mindset. Our mindset should have been, ‘We need to push, we need to keep pushing,’ because it doesn’t stop until the very last person on the floor. That’s something we are working on now, and that’s something that I feel like will transfer over to Regionals.”

After returning from Huntsville, the Gators had a meeting where the gymnasts went over what they can individually improve, and how they can improve their mentality as a team; both the players and coaches have said that the energy in practice since then has been great.

“This team has risen to the occasion,” Gator coach Jenny Rowland said. “The experiences that this team went through at SECs, lots of great things came from it and some lessons were learned. I’d say this team responded with an ‘A.'”

All-American junior Trinity Thomas was limited to just one event in Huntsville due to an ankle injury that she sustained on March 5. Two weeks later, her expected usage for Regionals is not clear. While the team has shown in multiple meets that it can compete at a high level without Thomas, her presence in the all-around would ease the tension on the rest of every lineup.

“She’s doing a little bit better every day,” Rowland said. “At this point I can’t say exactly she will be competing; we do see her in the bar lineup. Other than that, I don’t know that answer.”

“I think it’s gonna be great regional, and I’m really excited to go out there and give it our best shot.”-Junior Leah Clapper

There are multiple benefits to having the Regional in Athens, Georgia, for the Gators. For one, the trip is one of the shortest trips the team can take. While the last regional Florida competed in was in Corvallis, Oregon, nearly 2,500 miles away from Gainesville, this year’s trip is a mere 350 miles.

“Our freshmen and sophomores have yet to be in Athens in the Stegman Arena,” Rowland said. “However, it’s a really nice and intimate arena. The travel is short, so it should make for a really great and quick weekend for the Gators.”

Another added benefit is the familiarity of the arena. Because Georgia is in the SEC, both the junior and senior classes on the team have already performed in Athens. The last match up in the Classic City was in 2020, when Florida topped Georgia in the regular season, 197.80-196.50. The Gators will look to carry that positive energy from the last meet into this more consequential one in the postseason.

“I think it always feels good to be in a situation that you thrived in before because it just gives you that little extra boost of confidence,” Leah Clapper said. “It really doesn’t mean any anything in the big scheme of things, and what happened last year definitely does not have dictate what happens this year, but it is still nice to have that confidence.”

Carson Cashion is a first-year student at the University of Florida, and has a major in journalism- sports and media. Originally from the Orlando area, Cashion covers the UF Gymnastics Team, having formerly covered Oak Hall Sports.
Previous Adams Leads UF Softball Past Jacksonville 5-1
Next Miami Marlins look for more success 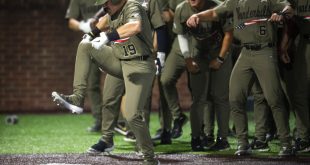 The SEC Continues to fight its way through Regionals