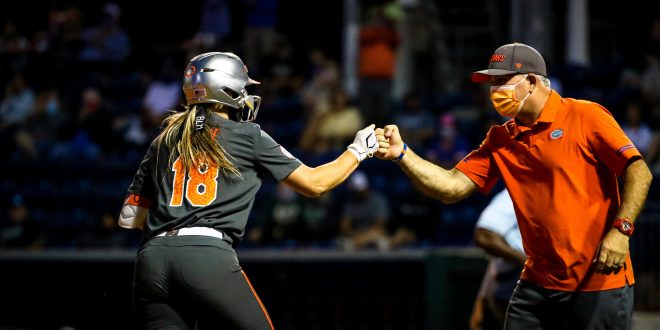 Florida continued their winning ways with a doubleheader sweep of USF on Wednesday. The No. 5 Gators cruised to a six-inning 9-1 victory in the first game of the doubleheader and won in a narrower second game, 2-1.

Charla Echols proved to be a difference-maker in both games, leading the Gators with four RBI in the doubleheader. She swatted a three-run home run in the first game and hit a decisive RBI double in game two to give the Gators the 2-1 lead. The Florida third baseman has hit three home runs and six RBI in her last three games.

Echols isn’t the only one swinging a hot bat, though. The Gators have hit 13 home runs over their last ten games played. Kendyl Lindaman and Emily Wilkie also went deep in the doubleheader on Wednesday.

Also, three Gators have reached base safely in more than ten consecutive games. Lindaman’s streak is now at 21 games, Hannah Adams’ is 18 and Echols’ is 15.

Shaking off the Rust

Western Kentucky has only played one game in the past two weeks. The Hilltoppers saw five straight games get postponed or canceled. On Wednesday, in their first game since March 24, they lost to Eastern Kentucky in a 1-0 contest.

After a two-week break, we fall to EKU, 1-0 while Kelsey Aikey matched her career high with 13 strikeoutshttps://t.co/tOCkmpgu5C

In her complete-game performance, Hilltoppers pitcher Kelsey Aikey struck out 13 but didn’t get any run support and took her fifth loss of the season. Western Kentucky head coach Amy Tudor acknowledged the unique situation COVID-19 has put her team in.

“With COVID, I think a lot of teams are going through this, so obviously, we didn’t make the adjustments tonight, but hopefully, this will get us back in the swing of things and we can get a little more consistent with playing games.”

The last game the Hilltoppers played before their brief break was a 2-1 win against No. 7 Kentucky. At that point, Western Kentucky had won six of their last seven games. But they’ll look to regain their rhythm this weekend against the Gators. They’ll also play in an exhibition against Softball Canada on Saturday at 4 p.m.

I'm a third-year student at the University of Florida passionate about storytelling and sportswriting. My goal is to work in communications for a professional sports team after I graduate.
Previous Tampa Bay Lightning Defeat Blue Jackets in High Scoring Affair
Next NCAA Volleyball Tournament Receives Criticism From Coaches