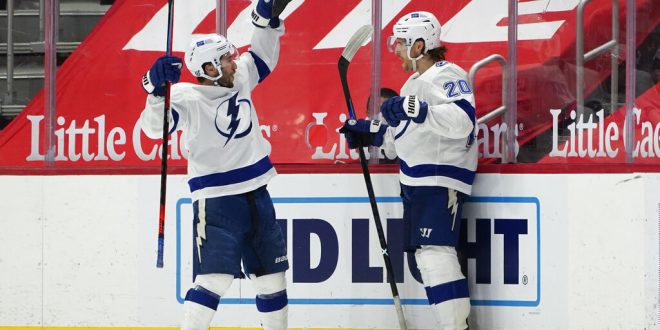 The Tampa Bay Lightning got back to their winning ways Thursday night in a 6-4 win over Columbus. The Lightning were on a two-game losing streak. They lost 5-1 to Detroit last Sunday and then 4-2 at Columbus this past Tuesday. The offense came back for the Lightning Thursday night as Tampa Bay put up 6 goals.

Tampa Bay got off to a hot start in the first period. The Lightning led 4-1 after the first period with all four goals coming from different Lightning players. First, Blake Coleman got the scoring started 58 seconds into the game for Tampa Bay. Next, Steven Stamkos scored his 17th goal of the year to make it 2-0. Then, exactly one minute later, Barclay Goodrow added a goal to make it 3-0.

After allowing a goal to Columbus, Tampa Bay beat the first-period buzzer with a Ryan McDonagh goal with 0.4 seconds left to make it 4-1.

Blue Jackets make it interesting in the 3rd

The Lightning built a 6-2 lead going into the 3rd period. The Blue Jackets tried their best to make a comeback in the final period. They were able to add two goals. One by Zach Werenski and Max Domi. Overall it was too little too late for the Blue Jackets and the Lightning picked up the much-needed win 6-4.

Looking ahead for Tampa Bay

Overall, this was a big win for the Lightning in order the keep pace with a loaded Central Division. The Carolina Hurricanes lead the division with 57 points and the Lightning are tied with the Panthers for 2nd place with 56 points each.

The Hurricanes have been on a hot streak recently to take control of the division. In their last 10 games, Carolina is 7-2-1 while Tampa Bay is 5-5.

The Hurricanes still only lead the division by one point and there’s still plenty of Hockey to be played. The Lightning will take on the Nashville Predators this Saturday.