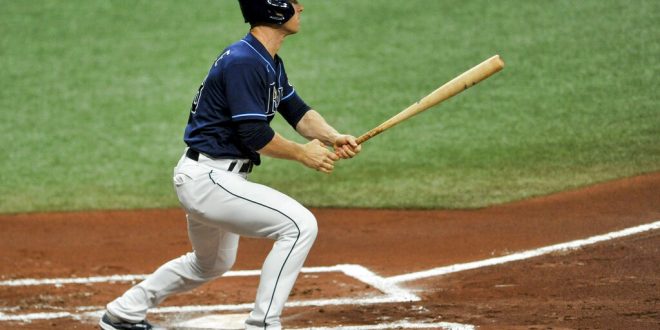 Eleven games in, the Rays suffer yet another tough loss. This time to the Texas Rangers.

Nothing went right at Tropicana Field. The offense failed to capitalize on runners on base, and pitchers were hit off of like a tee.

All Goes Quiet At the Plate…Again

Rays offense came out swinging to start, scoring two in the top of the first to make it 2-1. Joey Wendle doubled to score Randy Arozarena, and then, Wendle scored on a single by Yandy Diaz. Two runs on two hits and a hit by pitch. This would be it until Diaz brought another run in in the eighth inning.

But it was way too late by then.

At least he only walked one batter.

Rays starter Ryan Yarbrough successfully pitched to contact. The Problem was nothing went straight to guys on the field.

The Rays had some things go right. There were almost no free bases, and there was only one home run the whole game. The defense also played cleanly the entire game–which had been an issue for the bulk of the first 10 games.

The Rangers just kept making good contact and took advantage of the situations they had. They went 6-13 with runners in scoring position. That’ll win you the ballgame almost every time.

The best way to describe the Rays in the first 11 games is inconsistent. They can still win this series and probably will. But to do that, they need to find ways to string runs together. The home runs don’t always come, and there are nine ways to get on base. Might as well try all of them.

The Rays return tonight against the Rangers. Josh Fleming will take the mound to start the game. First pitch is at 7:10 p.m.

Harrison is a sports coordinator at ESPN 98.1 FM/850 AM WRUF. He served as a beat writer for Florida Gators football for the 2019 and 2020 seasons. He also contributes to WRUF's Gainesville Sports Center segments and makes appearances on the Clash on Harp on Sports. Harrison has been a content writer for WRUF since January 2019 as well.
@HarrisonSmaj
Previous Gators Walk It Off Against FSU
Next The Heat playoff picture