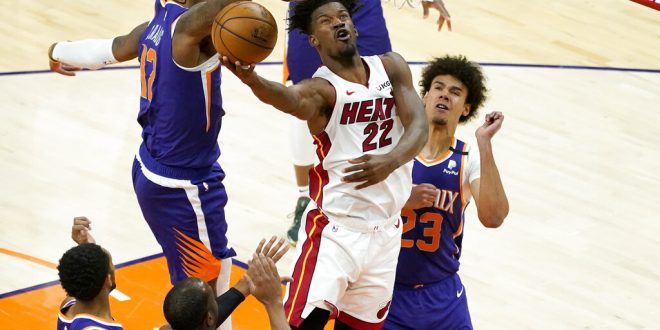 The Heat continue to be a streaky NBA team. Winners of six of their last eight, Miami looks to keep this momentum despite the loss of Victor Oladipo.

Looking towards the Playoffs

Playoff talk is upon us. With 75% of the season already done, there are only 18 games left of the shortened 72-game season. The Miami Heat are 28-26 and sit at the 6th seed in the East.

As has been seen this season, the Heat are a team of winning streaks and losing streaks. Now that the team has been winning as of late, if history repeats itself, a losing streak is expected.

If the Playoffs were to start today, Miami would be taking on the Milwaukee Bucks in a seven-game series.

Jimmy Butler is leading the team with 21.4 points, 26th in the league, 7.2 assists, and 2.1 steals, 1st in the league, per game. Simon Smith for HoopsHabit argues that Jimmy Butler should be strongly considered for Defensive Player of the Year.

The Miami Heat are still above .500 despite the stats not seeming to back it up. The Heat are tied for last in offensive rebounds, 26th in total rebounds, 28th in 3p%, and the 26th point scoring offense in the NBA. The bright spot, however, is their defense. They are the 4th best defense in the league in terms of points allowed.

One stat of note is that Miami is last in the league for field goals attempted. Shooting 46% from the field, the Heat could take a few more shots per game from inside the 3-point line and they could start to move up the ranks.

A big change that could be made is doing something with Precious Achiuwa. The team’s offensive and defensive ratings are drastically worse with the rookie forward on the court. Something is wrong here and the coaching needs to do something about it.

The Heat traded for Victor Oladipo as one of the last moves of the NBA trade deadline. Unfortunately, injuries are plaguing his time with the team. Oladipo has only played five games with the Heat thus far and is now out until the end of the season with a knee injury. He could return for a few games before the playoffs, but will be out for the rest of April at least.

Tonight, Miami takes on the Nuggets in Denver.

Jensen Young is a journalism student at the University of Florida. He works as a sports writer for WRUF.com and is the voice of trendings on Wednesday mornings on the WRUF radio station.
@Jensen_Young9
Previous Rays Clobbered By Rangers; Fall Back Below .500
Next Gators Softball Looks for Revenge Over UCF in Mid-Week Matchup