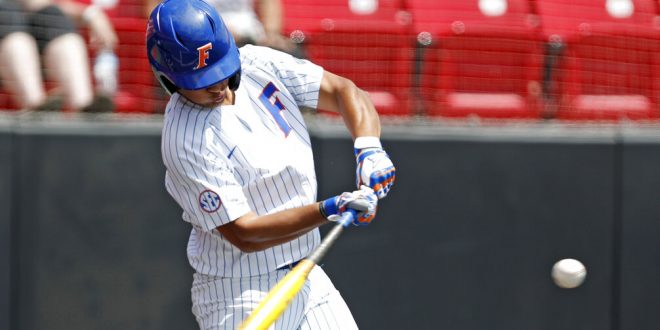 It took one swing to redeem a dreaded night at the plate. It’s an extra-inning game that took less than three hours too. The Florida Gators win in the 10th inning against rival Florida State on a walk-off home run by Kendrick Callao.

The offense struggled again, but the pitching got its payback, buying enough innings to get the Gators to the big hit.

“It’s one of those things,” Gators head coach Kevin O’Sulliavan said. “Kenny is a really good teammate. He continues to work hard and given the opportunity, he took advantage of it tonight.”

An Odd Night at the Plate

Normally, the Gators need the deep ball and stringing timely hits together to win the game. This time, small ball would dominate scoring at Florida Ballpark.

The Gators opened up scoring in the bottom of the second when Jordan Butler hit a sac-fly to left field to score Sterlin Thompson. Two at-bats later, the Gators traded another out for another run. Colby Halter hit a sac-fly of his own to score Jud Fabian.

Of course, with both runs scoring on sacrifices, it would lead to some very awkward–check that, down-right ugly–in-game stats.

Gators are 0-10 with runners on base tonight.

This game is about prevailing despite nights such as this one.

Fortunately for Florida, the Noles managed to do worse. They had five earned baserunners the entire game (two others reach base due to errors on Florida).

Despite FSU’s performance, they mustered two runs in the fourth.

In all objectivity, the whole night gives off the same vibes as the 2017 Florida-Tennessee game. It’s a sloppy as you can get for both teams–but something exciting at the end of the game is about to happen.

With two outs in the top of the 10th, Kendrick Calilao stepped up to the plate. It was his second at-bat of the night, pinch hitting for Thompson in the seventh.

On the next pitch, Calilao launched a nuke to left field to win the game for the Gators. The ball came off the bat at 107 mph.

“Like I said, good things happen to good people and he’s certainly put himself in a position to be successful tonight with all of the work that he’s been doing prior to tonight,” O’Sullivan said. “I’m really, really, really happy for him. He deserved a moment like that.”

The Gators only needed two pitchers to get through the 10-inning game. Garret Milchin pitched six innings of the two-run ball–only one earned run.

The usual Saturday starter, Jack Leftwich, came in relief and shut down the Noles further. He pitched four no-hit innings, walking one and struck out seven.

The Gators are back this weekend when they face the Mizzou Tigers for a three-game series.

Harrison is a sports coordinator at ESPN 98.1 FM/850 AM WRUF. He served as a beat writer for Florida Gators football for the 2019 and 2020 seasons. He also contributes to WRUF's Gainesville Sports Center segments and makes appearances on the Clash on Harp on Sports. Harrison has been a content writer for WRUF since January 2019 as well.
@HarrisonSmaj
Previous Lightning Face Predators for Last Time This Season
Next Rays Clobbered By Rangers; Fall Back Below .500