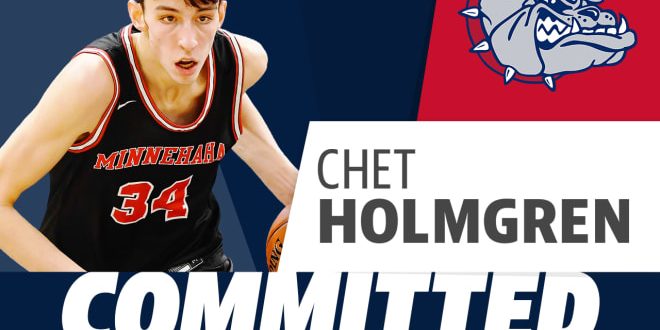 The No.1 basketball recruit in 2021, Chet Holmgren, commits to Gonzaga. (Photo via Rivals.com)

The Gonzaga Bulldogs may have lost to the Baylor Bears in the finals of the NCAA Men’s Basketball Tournament, but they won big in recruiting. The Bulldogs landed the number one recruit in the nation for 2021 in Chet Holmgren who selected the Zags over six other finalists.

Get to Know Chet Holmgren

Holmgren is a 7-foot-1 multi-dimensional athlete who has taken home some big time awards this year playing for Minnehaha Academy. He won the prestigious Naismith and Wooden Awards. On top of that, he made the McDonald’s All-American and Nike Hoops Summit teams.

He is also not only set as the number one recruit out of high school by ESPN 100, 247 Sports and Rivals, but also projected as the top pick in the 2022 NBA Draft on numerous mock boards. His skill set encompasses guard-like play at a full center’s size. He shoots the ball well from beyond the arc, finishes buckets around the rim and is a dominant shot blocker. Holmgren has one of the highest-rankings in basketball history, earning 1,000. The only other players on that list include the likes of Lebron James, Dwight Howard, Greg Oden, Andrew Wiggins and RJ Barrett.

What This Means for Gonzaga

The Bulldogs will lose Jalen Suggs and Corey Kispert to the NBA Draft this year, but return a solid team. After going undefeated in the regular season, the Zags fell in the national title game to Baylor in a disappointing loss. Holmgren is a former AAU teammate of Suggs and can step in and play a large role for the Zags. The Bulldogs are also expected to return Drew Timme and other key players.

Landing this level of a recruit for the Bulldogs is a huge testament to their program. Holmgren Is the highest-ranked recruit in program history, following the commitment of Hunter Sallis just weeks ago.

“They have just been staying committed to me in this process and show me where I fit in. They don’t need to change anything to fit me in. I can basically just be plugged in and be effective on both offense and defense.” (said Holmgren to Rivals.com’s Krysten Peek in November)