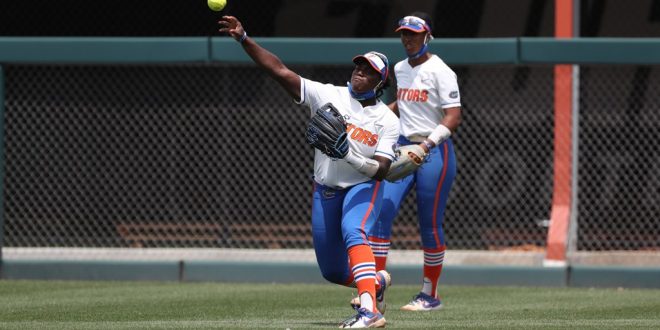 The third-ranked Gator softball team (33-6, 12-3 SEC) is set to take on the South Carolina Gamecocks (23-18, 2-13 SEC) in a three-game series starting Friday. Saturday, the Gators will hold their annual Senior Day, as the team is set to honor four seniors in Katie Chronister, Jaimie Hoover, Kendyl Lindaman and Jordan Matthews will be honored on the field. Additionally, Jordan Roberts, Sophia Reynoso and Jade Caraway will receive special acknowledgments.

After taking two out of three games against the Alabama Crimson Tide last weekend, the Gators will look to win their sixth consecutive SEC series. The Gators have yet to fall in a conference series this year and sit in second in the SEC standings behind Arkansas.

Elizabeth Hightower and Natalie Lugo have two of the top three ERA’s in the conference coming into this weekend. Lugo ranks second with a 1.22 ERA while Hightower is not far behind in third, holding a 1.35 ERA.

Katie Chronister has been a difference-maker for the Gators in the circle this season coming out of the bullpen. Chronister holds a 0.25 ERA when coming in relief, allowing only one run and eight hits through 27.2 innings of work.

The pitching staff has been dominant for the Gators, leading the SEC with a 1.46 ERA and five shutouts when facing SEC opponents.

The Gators traveled to Fort Myers to take on FGCU Wednesday night. The team was able to gut out a 3-0 win behind strong performances in the circle from Lugo and Chronister. The duo earned the team’s 14th shutout of the year, holding the Eagles to just three hits on the game.

Friday’s Florida-South Carolina game is set for a 6pm start.