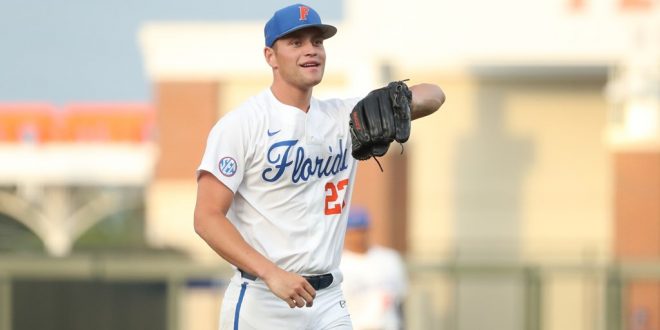 The orange and blue did win the series against SEC foe Georgia, but the Gators couldn’t get the sweep done. What plagued Florida most was not a lack of offense but a lack of timely hits. The Bulldogs only outhit Florida by one, yet they were able to rack up five runs more than Florida. Georgia avoids a sweep to keep their playoff hopes alive winning 6-1.

Florida would send three pitchers to the mound. Franco Aleman got the start. He pitched six innings with seven hits and four earned runs. He faced 25 batters striking out three of them. Aleman would record Sunday’s loss. Trey Van Der Weide took over facing only three batters but giving up a run. Former starter Jack Leftwich finished the game with 2 2/3 innings, two hits and three strikeouts.

Florida saw its only run scored early in the bottom of the second. Right-fielder Sterlin Thompson had the only RBI for the Gators with a stand-up double. Thompson’s day at the plate was solid going 2-4 with that RBI. Additionally, Kendrick Calilao went 2-4 with two singles.

The Gators put runners on the base path several times throughout Sunday afternoon’s matchup. Inevitably, getting the runners to cross the plate became the issue. A lack of timely hits hurt Florida.

On the other side, Georgia succeeded in hitting with runners in scoring position. Senior Garrett Blaylock went 1-3 with a three-run shot in the first inning, giving the Bulldogs the early lead.

Florida has wrapped up its regular-season play in their inaugural season at Florida Ballpark. But, college baseball is far from done. They head to Arkansas to take on the Razorbacks. Now, the Razorbacks have not lost a series all year.

The final three regular-season games will be played in Fayetteville, Arkansas starting Thursday. Following the conclusion of the regular season, it’s postseason baseball and potentially a trip to Omaha.