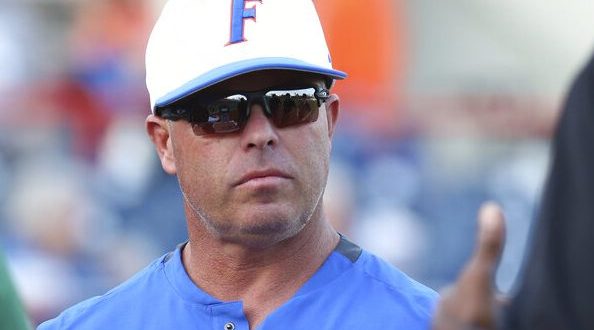 So, this is how the season ends. The Gators drop four in a row, including being swept by Arkansas. Just as the Gators look like they could salvage the season finale, Arkansas blew it open in the seventh for a 9-3 loss.

Gators head coach Kevin O’Sullivan stayed honest on his take of the series: They got beat.

“Credit Arkansas. They played really well this weekend,” O’Sullivan said. “Kind of fell apart there in the bottom of the seventh and they had the big inning with seven runs. Bottom line is they just outplayed us this weekend. They outpitched us; they outhit us. Credit them.”

A Tight Ballgame–Until It Wasn’t

There isn’t really a creative subheading for this one.

Scoring opened in the bottom of the fourth when Arkansas’ Brady Slavens took Gators starter Franco Aleman deep to left field. His two-run shot made it 2-0.

In the top of the fifth, Jacob Young gets the Gators on the board with a sacrifice grounder to third. Sterlin Thompson scores for the first run.

Fast-forward to the top of the sixth. The Gators have runners at the corners with no one out. Kendrick Calilao grounded into a double play that brought home Jud Fabian. Arkansas traded a run for two outs, but the game was then tied 2-2.

It stayed tied until the bottom of the seventh. Then, the plan for a close ballgame went awry.

Arkansas platted seven runs to run away with the game. Florida picked up a final run in the top of the ninth to reach the final score of 9-3.

Onto the SEC Tournament

With the regular season wrapped up, the Gators head into the SEC Tournament. The Gators are the sixth seed in the tournament. Their first game is against 11th seed Kentucky on Tuesday at 10:30 a.m.

The first round is single elimination. So, at least at first, it’s do or die for Florida.

Harrison is a sports coordinator at ESPN 98.1 FM/850 AM WRUF. He served as a beat writer for Florida Gators football for the 2019 and 2020 seasons. He also contributes to WRUF's Gainesville Sports Center segments and makes appearances on the Clash on Harp on Sports. Harrison has been a content writer for WRUF since January 2019 as well.
@HarrisonSmaj
Previous Gators Baseball Loses Heatbreaker Game and Series to Arkansas
Next Hawthorne’s Chaz’ Mackey – Always Bouncing Back