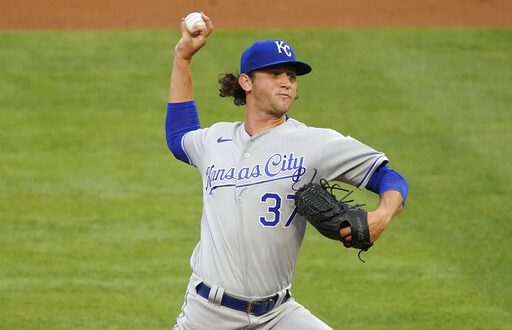 However, Kowar’s debut was forgettable as he was unable to make it out of the first inning against the Angels. The start statistics included four runs, three wild pitches, two walks, and 0 strikeouts. While the Angels are averaging five runs at home they were without lead hitter Mike Trout, who out with an injury. Kowar only retired two batters before manager Mike Matheny saw enough.

Good news, however, Kowar made a couple of good pitches Anthony Rendon and Jose Iglesias fouled. That unfortunately was the end of the good news.

Jackson Kowar has talent, it was just an unfortunate start to his MLB career. The former Florida Gator was the No. 97 overall prospect and the 33rd overall pick in that 2018 Draft.

Kowar led all qualified Triple-A pitchers with a 0.85 ERA, 1.94 FIP, and .165 batting average against through six starts (31 2/3 innings) for Omaha Storm Chasers. Jackson’s 41 strikeouts gave him a 33.9 percent strikeout rate in triple-A, ranking fifth among all pitchers. Jackson was the 75th ranked prospect in the MLB and named the east pitcher for the month of May.

For a pitcher of Kowar’s talent, it’s replicating the success that he found at Florida and the minors that will be the key for Jackson. During his Gainesville career Jackson had a 25-6 career record a 3.53 ERA and 243 strikeouts.

During his Gainesville career, the 6-foot-5 right-hander was a key part of the Gators 2017 College World Series with victory.

Kowar has been a winner throughout his career and has the potential to be a key part of the Royals rotation in the future. Pitching a 97 mph fastball his 84 mph changeup and 87 mph breaking ball have the potential to ruin hitters for the next decade.

Last night wasn’t the start the Royals or Kowar hoped for. It could however be the start of a bright future.

Ethan Sanabria is a second-year telecommunications student on the digital film and television production track at the University of Florida's College of Journalism and Communications. He has previously worked as a broadcaster for the Florida Flight basketball team and currently helps the production of WUFT news facebook lives. You can reach Ethan on any of his social media or at Ethansanabria@ufl.edu.
@ethansanabria
Previous Jaguars Robinson looks to build on stellar rookie season in year two
Next NCAA Sets 2021 Baseball Super Regional Schedule