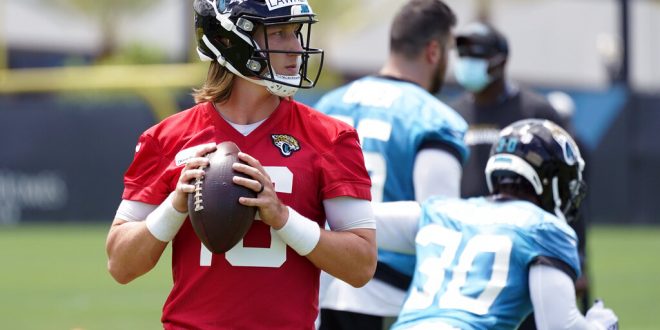 Former Gator quarterback Brian Schottenheimer is enjoying his time as the now passing game coordinator and quarterback coach for the Jaguars. After working with star quarterbacks such as Philip Rivers and Russell Wilson, he is now coaching No. 1 draft pick Trevor Lawrence.

Before accepting his current role, Schottenheimer was the quarterback for Florida from 1994-96. After his collegiate career, he followed in his father Marty Schottenheimer’s footsteps, transitioning into a coaching role. Since then, his resume includes working as the Seahawks offensive coordinator from 2018-20, Indianapolis Colts as its quarterback’s coach from 2016-17, Georgia in 2015 as the program’s offensive coordinator and quarterbacks coach and many other teams.

When Schottenheimer was fired by the Seahawks, he said it gave him time to reflect on his career and where he wanted to go next. He said when his father was moved to a hospice on Jan. 30, it was a huge curveball; but being out of a job allowed him to spend time with his father.

Before working with the former Clemson quarterback, Schottenheimer said he met Lawrence when he was working at the University of Georgia. He continued that for a young quarterback, Lawrence has a strong foundation in the fundamentals of the game.

Schottenheimer even compared Lawrence to Philip Rivers. He said the two both have a similar self-awareness and calm demeanor.

Yet the Jaguars haven’t picked who the starting quarterback will be for the upcoming 2021 season. Schottenheimer said he is giving all of the quarterbacks’ reps to make it competitive.

Passing game coordinator Brian Schottenheimer says Jaguars have yet to decide on a QB1: "It's still too early to say how this thing's going to play out."https://t.co/AiPedsvc8m pic.twitter.com/ngYS0FumzJ

It will be exciting to see how the rest of the offseason plays out and which quarterback will rise as the Jaguars starter.

Kaitlyn Wadulack is a second-year Journalism student specializing in Sports and Media at the University of Florida. You can reach Kaitlyn at k.wadulack@ufl.edu.
Previous Browns look to contend for AFC title
Next Lightning Take Series Lead with Win Over Islanders in Semifinals