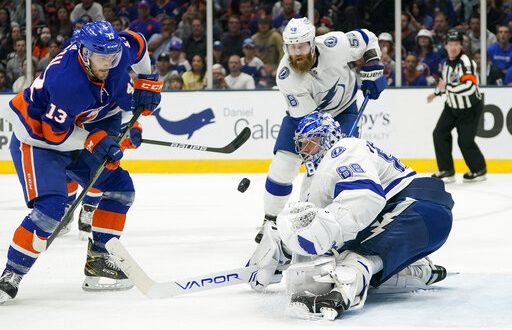 The Tampa Bay Lightning took their confidence from their Game 2 victory and shined on Thursday night. In Game 3 of the semifinals, the Bolts defeated the New York Islanders at Nassau Veterans Memorial Coliseum, 2-1. Tampa’s defense dominated with Andrei Vasilevskiy stopping 27 shots on goal for the Lightning to lead the best-of-seven series 2-1.

At puck drop, Islanders’ center Casey Cizikas won the faceoff against Bolts’ center Yanni Gourde. It was back-and-forth control of the puck, with both teams having scoring opportunities early in the game. Halfway through the period, center Blake Coleman got his own rebound and passed the puck at a nasty angle right in front of the net. Gourde took the puck and scored with a wrist shot right past goalie Semyon Varlamov at 10:05, getting the Bolts on the board. The Islanders couldn’t surpass Tampa’s defense the rest of the period, ending the first 1-0 Lightning.

Both teams fought hard in the first half of the second period. The Islanders were given a power-play opportunity at 14:28 after Bolts defenseman Mikhail Sergachev was sent to the box for roughing right-winger Kyle Palmieri. While the Islanders couldn’t connect with the net during the power play, a misplay by defenseman Erik Cernak led right-wing Cal Clutterbuck to score on Vasilevskiy with a tip-in shot to tie the game at 17:01.

Immediately after the goal, defenseman Adam Pelech was called for interference against right-wing Nikita Kucherov at 17:38. This penalty proved fatal for the Islanders. Seconds after the Bolts powerplay ended, center Brayden Point scored while being knocked down and shoved into the ice at 19:40. The goal was a huge response by Tampa to edge them the 2-1 lead at the end of the second.

Action picked back up in the third with the Islanders desperate to tie the game. Tampa’s defense was unstoppable, with Vasilevskiy and the Bolts’ defensemen blocking and stopping shots left and right. With less than two minutes left in the third, the Islanders pulled Varlamov from the net. Even with a 6-on-5 advantage, the Islanders struggled to control the puck in Tampa’s zone, costing them the game. The Lightning locked in their 2-1 victory at the sound of the buzzer.

Two of the three stars came from the Bolts. The third star was Clutterbuck, scoring the Islanders’ first and only goal of the game. The second star was Point with his impressive game-winning goal, and the No. 1 star was the big cat Vasilevskiy with 27 saves.

Gourde said the key to the Bolts win was how they kept the game simple, especially in the third period.

Both teams have a strong defense that’s hard to get the puck through. During the first period, the Lightning were able to make plays and passes in the neutral zone to set them up for scoring opportunities. Throughout the game, Tampa’s defense also appeared more confident after their Game 2 victory at home. They were able to protect the net aggressively to negate most of the Islanders’ shots.

Scoring opportunities are difficult to come by during the playoffs, let alone with two strongly defended teams. Point said that Islanders don’t give much time or space to score.

The two teams will face off Saturday in Game 4 of this semifinal series.

Kaitlyn Wadulack is a third-year journalism student specializing in sports and media at the University of Florida. You can reach Kaitlyn at k.wadulack@ufl.edu
Previous Former Gator Brian Schottenheimer is Enjoying Working With Jaguars
Next Gators’ Stock in MLB Draft