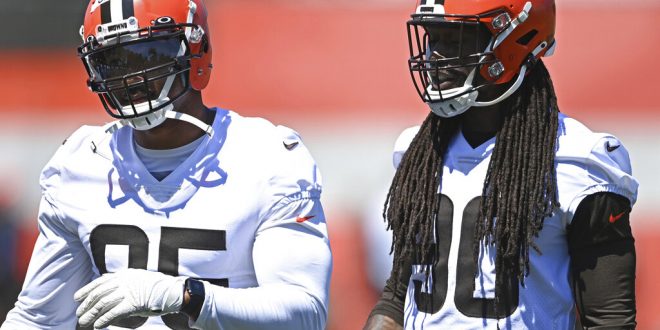 After closing the 2021 mandatory minicamp on Thursday, the Cleveland Browns look to compete for an AFC title after an impressive 2020 season. With one of the best rosters in the NFL, the Browns have a good chance to reach that goal.

The Browns made a number of roster moves to boost their AFC title chances. On March 18, they signed free agents Takkarist McKinley and John Johnson III to improve their defense. Less than a month later, the Browns signed former first overall pick Jadaveon Clowney. Clowney will play on the opposite side of Myles Garrett on the defensive line. Speaking on Garrett, Clowney is excited to play with someone of his caliber:

In the 2021 NFL Draft, the Browns continued their focus on improving their defense. In the first round, they drafted cornerback Greg Newsome II out of Northwestern. The Browns followed that pick by drafting linebacker Jeremiah Owusu-Koramoah in the second round.

On the offensive side of the ball, the Browns re-signed wide receiver Rashad Higgins, who accounted for nearly 600 yards and five touchdowns last season.

Moving to the offseason practices, Browns players made headlines after a number of them announced they would not be attending voluntary OTAs due to COVID-19 and injury concerns. Starting running back Nick Chubb was one of the veterans who did not attend:

Along with Chubb, the group included quarterback Baker Mayfield, wide receiver Jarvis Landry and other offensive players. Chubb and others did report to the mandatory minicamp.

Building off of their historic 2020 season, the Browns boast what could be the best team in the AFC in 2021. Mainly, Mayfield said the team is focused on continuing on building a winning culture with the ultimate goal of winning their first Super Bowl:

Going into the upcoming season, the Browns return plenty of production from last year and have players returning from injury. Star wide receiver Odell Beckham Jr. returns to the field after tearing his left ACL in the Week 7 matchup against the Bengals. One of the best wide receivers since entering the NFL, Mayfield expressed the importance that Beckham Jr. brings to the Browns’ offense:

In addition to Mayfield, Chubb stated how Beckham makes the Browns better:

“We were that good without OBJ,” Chubb said. “We can be even better with him.”

After closing minicamp on June 17, the Browns open training camp on July 27. After training camp, Cleveland faces Jacksonville to start preseason play. Finally, the Browns start the regular season on Sept. 12 with a matchup against the Kansas City Chiefs. With the amount of talent returning and offseason roster moves, the Browns are in a good spot to achieve an AFC title.