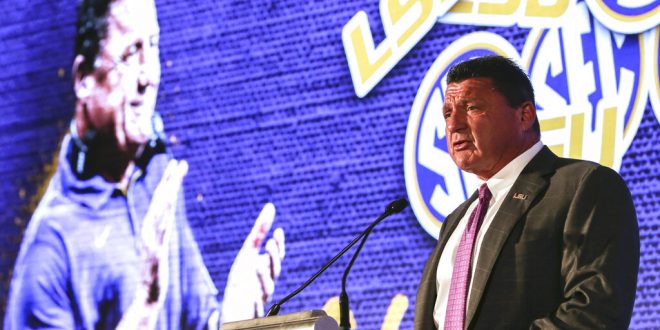 Gotta get that bad taste out our mouth. Ready to get back on that field @Coach_EdOrgeron ✖️ #SECMD21 pic.twitter.com/lcXAKApXdT

Coach O on the quarterback battle

The talk around LSU football for most of the offseason has been about the quarterback battle. Myles Brennan was the Week 1 starter last year but got hurt after the Missouri game. From there it was between TJ Finley and Max Johnson. Johnson became the clear starter toward the end of the season with impressive performances against Florida and Ole Miss. Finley later transferred to Auburn, which makes it a two-person battle for the starting job.

Coach O said the battle has been pretty even so far.

The cause for much hope around the LSU football program is the fact that they are bringing back 19 of 22 starters from the 2020 season. The Tigers were thought of as a young team last year. Certainly not thought of as a 5-5 team. However, injuries and some star players opting out derailed the season.

The Tigers brought back all of that young talent from last year. Plus, some star players that could have gone to the draft have decided to come back.

Kayshon Boutte, Tyrion Davis-Price, BJ Ojulari and Derek Stingley all return for the Tigers. LSU also brings back all but one starter on the offensive line led by graduate senior Austin Deculus.

Every year is tough in the SEC. This year will be much of the same. LSU has road games against archrival Alabama and the high flying offense of Ole Miss. The Tigers home games include Florida with revenge on its mind and Texas A&M who will be looking to take the next step and get to Atlanta.

Overall, LSU will have a very difficult schedule to try to prove that last year was just a fluke. However, the players and coaches seem determined to be great this year.

LSU opens the season on September 4 at UCLA.