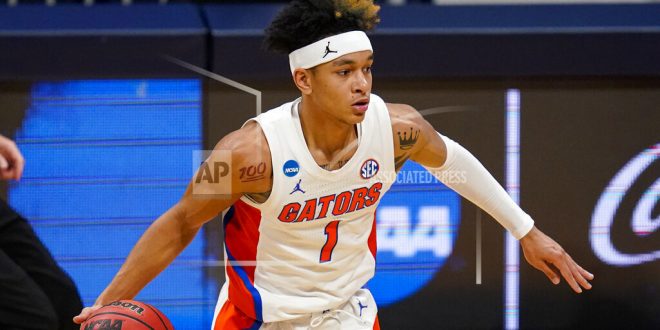 Florida guard Tre Mann (1) plays against Virginia Tech in the first half of a first round game in the NCAA men's college basketball tournament at Hinkle Fieldhouse in Indianapolis, Friday, March 19, 2021. (AP Photo/Michael Conroy)

The 2021 NBA draft took place in the Barclays Center on Thursday night and this year’s draft class seems more stacked than ever. Let’s look at the Orlando Magic’s picks and where some of the Florida Gators ended up.

The Orlando Magic commenced a rebuild of their roster by trading away their 3 most valued players before the trade deadline this year. One key factor that the team lacked going into this year’s draft was an established backcourt. So it’s no surprise that the Magic jumped on drafting Jalen Suggs from Gonzaga after the Toronto Raptors opted for Scottie Barnes.

“Perhaps most importantly for the Magic, he’s been a winner everywhere he’s played and has shown no problem sacrificing touches and stats for the good of the team,” Jonathan Givony, ESPN’s NBA Draft expert, said. “Something that should pay significant dividends in the locker room in helping to avoid the type of long cycles of mediocrity and dysfunction that has plagued other rebuilding teams.”

Now, with a potential steal from the draft, the Orlando Magic could have found their franchise-changing point guard.

Franz Wagner is a small forward from Michigan with an outstanding positional size for the wing at 6-9. Despite Wagner’s young age, he is one of the most experienced players in the draft, playing 59 games professionally in Europe.

Wagner has a great ball handle around the perimeter and can consistently knock down threes while playing great team defense. Wagner averaged 12.5 points, 6.5 rebounds, and three assists per game as a sophomore.

“Franz Wagner in many ways represents an ideal compromise between building for the future and trying to win now, while also providing a strong positional fit at the 3/4 spots after selecting Jalen Suggs at No. 5.,” Givony said. “Wagner is the same age essentially as all of the freshmen picked in the top five, but brings several ancillary skills with his off-ball defense, passing ability, and promising shooting indicators that are difficult to find in a 6-foot-9 wing player.”

Tre Mann led the Florida Gators with 16 points a game and shot 40.2% from the 3-point range. He continued his offensive dominance by averaging 20.9 points during Florida’s final seven games. His four consecutive 20-plus-point games matched the longest streak by a Gator player over the past 25 years. Mann was also the team’s second-leading rebounder, averaging 5.6 a game.

“Tre Mann’s talent with the ball, positional size — which should allow him to play either guard spot — and upside is attractive at this spot,” Givony said. “He’ll need to add strength and improve his consistency as a decision-maker and defender to carve out a niche in a rotation short-term, but he has the type of shot-making prowess, creativity and versatility NBA teams covet with the bonus of being a late-bloomer physically who still has room for growth as his frame continues to evolve.”

Scottie Lewis was a top 10 recruit coming out of high school, but he never quite lived up to his expectations during his two years as a Florida Gator. Lewis’s game needs a lot of polish, but he has terrific physical tools with good versatility that can be built upon. Right now, Lewis may not be a suitable player to play on the roster, but he would be a likely candidate for one of the team’s two-way deals.