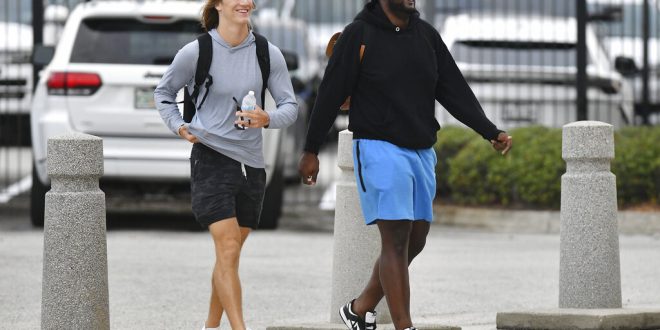 The Jacksonville Jaguars held their first day of training camp at the Dream Finders Homes Practice Complex on Wednesday morning.

It was the first training camp under Head Coach Urban Meyer, which featured a non-padded practice. Since he was hired back in January, he has looked to change the culture by promoting the principle of “Own It.”

Meyer was the first person on the field. Before arriving on the field, he gave his team a message.

“Don’t make excuses, seems like this whole world is full of excuses right now — no excuses. Take care of your bodies, training camp is hard. We have a great sports.”

The Jaguars looked in pretty good shape to start their day. Besides the Florida heat, everyone seemed to be in great condition while running through team drills. “Yeah, their good, we did a conditioning test and everyone passed it — It wasn’t overly difficult,” Meyer said.

This season, Meyer has held everyone accountable and pushed each player and staff member to the best of their abilities to perform at their best. One player by Meyer in the locker room challenged this offseason is wide receiver DJ Chark to increase his weight gain.

“DJ is great — he wants to [be challenged] I heard someone say how can you challenge him [DJ Chark] but I mean that’s daily and that’s part of a coach’s job. There is zero resistance and that’s something that can make him better and he has worked hard at it. He looks great — his body looks great; his strength has really improved.”

After practice Meyer gave a percentage of how many players on the team were vaccinated. “We are up over 80 percent now [percentage of vaccinated players],” he said.

As the Urban Meyer era continues, it will be great to see how he can transform a Jaguars team that went 1-15 last season and hasn’t made it to the playoff since 2017.

Head coach Urban Meyer stated that Lawrence and Minshew would alternate first-team reps.” They will rotate,” Meyer said. “It’s a long process, but today was Gardner [Minshew] and Trevor [Lawrence] at one [first-team], and then tomorrow will be a little different.”

Lawrence completed 16 of 18 of his passing attempts during the team 7-on-7 and 11-on-11 drills making it an impressive first day for the rookie quarterback. Wide receiver DJ Chark expressed a view words about Lawrence saying, “It was pretty cool. I got a few reps with him. We connected a few times.”

Chark also talked about a pass that Lawrence made towards the end of practice to one of their wide receivers Philip Dorsett. “I saw him throw a deep post at the end for a touchdown –that was a nice ball,” Chark said.

File this under things we love to see.@Dream_Finders | #DUUUVAL pic.twitter.com/lqv5wp6e3Q

The two quarterbacks dealt with off coverage from the defense as the Jaguars were fined during OTA for press coverage. Still, former Seahawks cornerback Shaquill Griffin expresses his thoughts about Lawrence at quarterback.

“We’re putting the team on his back and we’re going to be right there with him and to fully support. So, whatever it is, I know he’s going to continue to work. I know he has the passion, the love for the game and we’re right behind him 110 percent.”

Meanwhile veteran quarterback Minshew completed 19 of 27 passing attempts to finish the day. He made a great pass connection with tight end James O’Shaughnessy with a pass defender narrowing in to make a play on the ball.

As training camp continues, it will be an exciting quarterback competition between the two quarterbacks leading into the preseason and the regular season to see who wins the starting position.

The Jaguars will begin full pads next week on Tuesday. Their defense has had to play a laid-off defense with no contact due to their violations but will start to play press coverage in four days.

After practice, Griffin stated that it has been “very tough” to lay off coverage during training but remains optimistic as he counts down the days until press coverage and full pads start. “Once it gets to pads and gets to really competing, we’ll get right to it,” he said. I have three more days in me. [After] three days tops, I have nothing left.”

Griffin is expected to play a significant role in Jaguar’s defense as a leader and playmaker this season.

“[He] brings a lot of leadership, good mobility, [ability] to flip his hips and break all of the passes,” Chark said. “I think this acclimation period helps the DBs a lot because it makes it tougher for them, having to shadow a receiver. But you know, I think he’s a solid corner and it’s good that we have him here.”

The Jaguars defense will test the wide receivers in the coming days, which will create a competitive environment among the offensive and defensive players. Josh Allen, Myles Jack, CJ Henderson, Shaquill Griffin, and the rest of the defense should be fun to watch during training camp.

End of day one

The Jaguars will open up their training camp to the public on the second day of practice. The gates will open at 9:00 a.m., and practice will be around two hours, starting at 9:45 a.m.