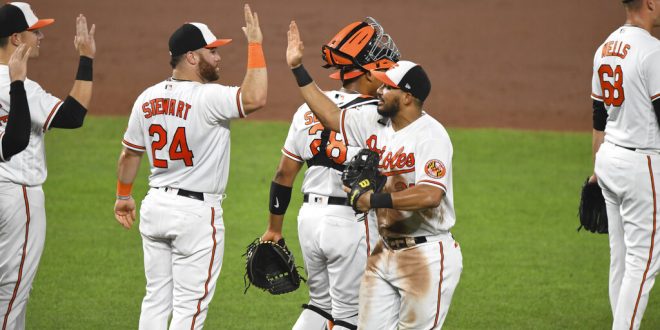 Baltimore Orioles congratulate one another after defeating the Los Angeles Angels 10-6 in a baseball game Wednesday, Aug. 25, 2021, in Baltimore. (AP Photo/Terrance Williams)

The Baltimore Orioles broke their 19-game losing streak after defeating the Los Angeles Angels Wednesday night. They avoided their 20th straight loss with a 10-6 victory, their first win since Aug. 2nd.

The Angels were up 6-2 in the fourth inning as Shohei Ohtani would leave in the top of the sixth giving up four earned runs. The O’s would score a run in the seventh inning and five in the ninth.

In Ohtani’s five innings, he allowed five hits, and Chris Ellis took over on the mound, allowing three runs in three innings. Some notable players for the Orioles in this matchup were Ramon Urias, Kelvin Gutierrez, and Austin Hays.

Hays contributed to the win with a pinch-hit two-run double, and both Ramon Urias and Kelvin Gutierrez completed bases loaded walks. Center fielder Cedric Mullins’ sacrifice fly ended up pushing the score to 10-6.

In addition, the O’s best hitter this year, Cedric Mullins, added to his strong campaign with two hits including a double and three RBI’s. The 26-year-old is now hitting .307 this year with an .897 OPS.

During their losing streak, the Orioles gave up 163 runs. They were just two loses short of reaching a franchise and American League record of 21 consecutive loses.

“There was tension in our dugout, there was pressure,” Orioles Manager Brandon Hyde said. “Everybody was on the top step. Our guys just really wanted this one. We’re tired of hearing, tired of seeing it on TV. Everybody’s tired of it.”

Mullins explains that his team’s dedication and persistence won them the game in the end.

Brandon Hyde explains the relief him and his team felt after their victory.

He continues to discuss going up against a well rounded successful player like Ohtani.

The Orioles will be meeting up with the Angels again Thursday night to fight for their second win. Keegan Akin will be the starter pitcher on the mound.  Baltimore will then host a three game series against the Tampa Bay Rays.