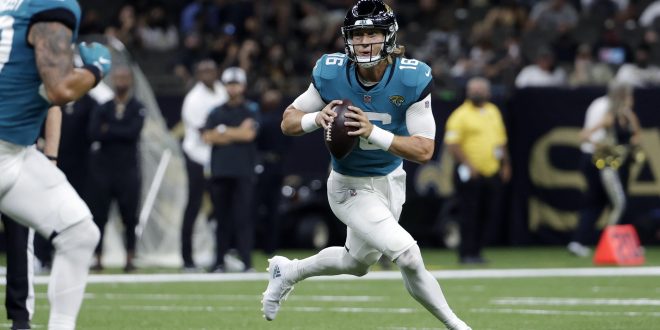 Trevor Lawrence was named the Jacksonville Jaguars starting quarterback for the opening week of the NFL season.

The announcement comes after the Jags 23-21 loss to the New Orleans Saints Monday night. The rookie QB  struggled against the Saints, completing 14 passes out of 23 attempts for 113 yards. Lawrence posted a 73.3 rating. Despite the struggles, the No. 1 overall pick is looking forward to leading the Jaguars under center to start the season.

“I’m really excited for the opportunity,” Lawrence said. “We still have the same task in front of us. We have got to get a lot better individually, as a team, and as an offense. I’m just looking forward to going to work this week to bring some clarity.”

Lawrence was able to beat out Gardner Minshew and C.J. Bethard for the starting QB job. However, Lawrence will be facing adversity coming into week one, with rookie running back Travis Ettiene suffering a season-ending foot injury against the Saints. The Clemson superstar will have to wait to continue his chemistry with his fellow Tigers star.

Throughout training camp, it was clear that Minshew would not make the QB competition a cakewalk for Lawrence. Minshew gave the rookie QB a run for his money, and Lawrence and Meyer are appreciative of Minshew’s effort, despite not winning the starting job.

“My respect for Gardiner has been well documented,” Meyer said. “He’s just a warrior. He got stuck behind some protection issues and at times he was running for his life.”

Lawrence Confident for Week One Against Texans

The QB reviewed film from the Saints game and noticed some smaller issues that he has to fix going forward. Lawrence is confident he can develop his skills going forward through film study and on-field reps.

“We have to be more on the same page as an offense and that starts with me,” Lawrence said. “Staying out of second and third and long, staying on schedule that comes with being more productive in the run game and not trying to force things downfield. I’m looking forward to this week, going back to the drawing board and getting some good reps in practice, and getting better.