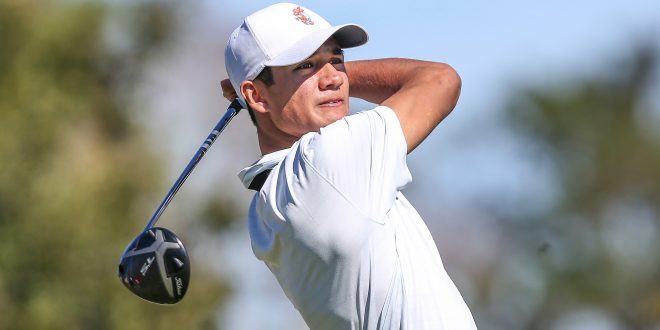 Florida golfer Ricky Castillo tees off on the first hole during the first round of an NCAA golf tournament on Monday, Feb. 3, 2020 in Ponte Vedra, Fla. (AP Photo/Gary McCullough)

After they tied for eighth place out of 15 teams in the OFCC/Fighting Illini Invitational, the Gators will head to the Lone Star State to make their fifth appearance at the Collegiate Colonial Classic Monday through Tuesday.

Florida was unable to compete in last year’s event because COVID-19 restricted the field to schools only in the Big 12 Conference. TCU’s home course — Colonial Country Club in Fort Worth, Texas — will play host to the two-day event formerly known as the Nike Collegiate Invitational.

In the program’s four outings, Florida’s best finish came in its first ever appearance in 2016 when it finished runner-up to Vanderbilt by one stroke.

Florida is ranked No. 26 in the latest GolfWeek.com Men’s Team Collegiate Rankings. The Gators will compete against 15 teams from around the nation. This includes four teams ranked inside the top 10: No. 1 Oklahoma, No. 5 Oklahoma State, No. 6 Texas, No. 7 Clemson.

Golfers will play 36 holes on Monday before they play 18 holes on Tuesday to complete the 54-hole tournament. Each team will start five golfers, and the lowest four scores of each 18-hole round will count toward its overall score. Consequently, 12 individual 18-hole scores will add up to an overall par of 840.

Florida’s lineup boasts three upperclassmen and a pair of sophomores. Junior Ricky Castillo will start Monday morning’s round on the 430-yard 15th hole. In the season-opening OFCC/Fighting Illini Invitational, Castillo shot 78 in the first round before he turned in rounds of 69 and 72 to finish nine over par and tied for 39th out of 81 golfers.

Junior USC transfer Yuxin Lin will start his round on the 192-yard 16th hole. The Beijing, China, native sunk a hole-in-one in the first round of Florida’s season opener en route to carding a team-low, four-over-par 214.

Junior John DuBois will begin on the 387-yard 17th hole after the Windermere, Fla., native fired seven over par in the season-opening tournament. Sophomore Joe Pagdin and redshirt sophomore Christophe Stutts will both tee off the 441-yard 18th hole. In their season debuts, Pagdin shot 10 over par and Stutts finished 11 over par.

Hello, I am currently a junior at UF studying sports media journalism with a concentration in Political Science. I contribute web and radio content weekly for WRUF ESPN Gainesville. Be sure to check out some of my recent articles!
Previous Tom Brady and Bucs edge out Patriots 19-17
Next Pat Dooley’s ‘Back 9’ October 4th