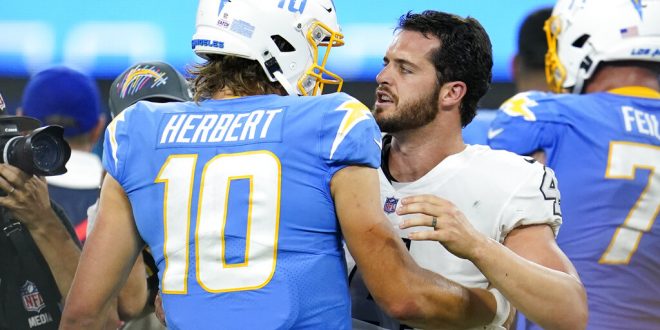 Entering Monday Night Football’s Chargers-Raiders matchup only two teams in the NFL remained undefeated. The Raiders shocked the NFL by defeating three of last year’s playoff teams to enter undefeated. The Chargers on the other hand came off an impressive victory over Patrick Mahomes and the Chiefs.

Now, only the Arizona Cardinals are left unbeaten after the Chargers beat the Raiders 28-14.

The Las Vegas Raiders offense was non-existent in the first half scoring 0 points, while the Raiders defense wasn’t any better giving up 21 to the Chargers.  Vegas scored 14 unanswered to start the second half but it was too little too late. Raiders coach Jon Gruden compared the game to a boxing match.

Raiders quarterback Derek Carr threw for 196 yards with one TD and an interception and the team also fumbled twice in the loss. Hunter Renfrow and Darren Waller provided the scores for Las Vegas.

The Los Angeles Chargers move onto 3-1 on the season with the victory at home. Austin Ekeler ran for 117 yards while adding two scores, one on the ground and one through the air. However, it was Justin Herbert who caught headlines after the L.A. win.

Herbert became the first quarterback in the Super Bowl era to throw 500 completions before his 20th start; he made his 19th career start for the Chargers on Monday, throwing for three touchdowns in the first half but he credits his defense for the big victory. They held the Raiders scoreless through the first half.

Currently, the AFC West looks like the most competitive division in all of football. The Chargers, Broncos, and Raiders all sit at 3-1 on the season. Furthermore, the defending AFC Champs Kansas City sits at 2-2. Chargers coach Brandon Staley described the division as “loaded” in his post-game press conference.

Ethan Sanabria is a second-year telecommunications student on the digital film and television production track at the University of Florida's College of Journalism and Communications. He has previously worked as a broadcaster for the Florida Flight basketball team and currently helps the production of WUFT news facebook lives. You can reach Ethan on any of his social media or at Ethansanabria@ufl.edu.
@ethansanabria
Previous Duel in the Desert: Monday Night Football Preview
Next Three Former Gators Set For MLB Postseason