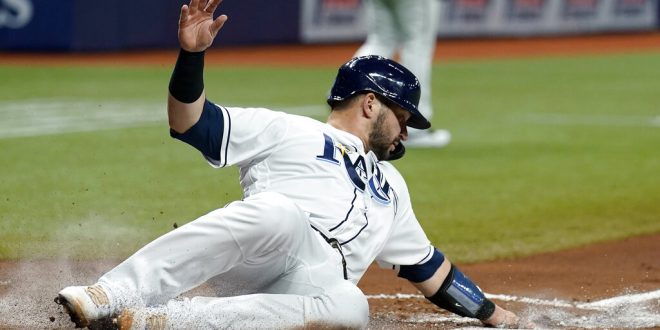 Annually, the tenth month of the year causes rejoice from baseball fans near and far. Why? Notably, October marks the start of the MLB postseason, beginning with Tuesday’s American League (AL) Wild Card game between the Yankees and Red Sox.

Surely, there will be former Gators among the field of competition in the 2021 postseason. In 2021, there were 14 total Gators on MLB rosters. Mainly, there are four alumni on postseason rosters, with three active due to submarine relief pitcher Darren O’Day sitting on the Injured List. So, San Francisco’s Anthony DeSclafini, St. Louis’ Harrison Bader and Tampa’s Mike Zunino will represent the University of Florida as the playoffs get underway.

No team gave more surprises than the Giants in 2021. After finishing a distant third in the National League (NL) West standings during 2020, the media certainly did not have them circled into be a contender in 2021. Yet, the Giants burst out of the gates in 2021, finishing with a Major League best record of 107-55. Such success is fueled by acquisitions such as former sixth round pick out of UF, Anthony DeSclafani.

After a career worst 7.22 ERA in 2020, Cincinnati opted to let DeSclafani walk in free agency. Here, he signed with the Giants. Since, the former Gator has not looked back. 2021 sees the right hander sporting career highs in wins and ERA, coming in at 13 and 3.17 respectively. Also, he led the MLB in shutouts, with a career high of two in 2021. Jointly, DeSclafani works with staff-ace Kevin Gausman and Logan Webb to anchor San Francisco’s rotation. Expect to see him pitch in game two of the NLDS v. the Dodgers/Cardinals winner.

Bader’s glove acumen has made its way around highlight reels for a few seasons now. But, it’s the roll he played on the Cardinals 17-game win streak, which secured a NL Wild Card spot, that has put the young outfielders name around public shockwaves.

Okay, here are some stories to read while Instagram is down … @aybaybader on what @Cardinals fans can expect this #offseason: https://t.co/AXqy622L1w

On Sept. 27, Bader was named NL Player of the Week after hitting .517 with three home runs, two stolen bases and a 1.548 OPS during that weeks action. This play was critical, as his heroics were vital towards the Redbirds’ 17-game win streak in late September. Also, in 2021 he saw career highs in batting average, home runs and RBI’s, sitting at .267/16/50 respectively. Look for Bader to continue his success if the Cardinals are to pull off the upset v. the Dodgers Wednesday.

Gators fans know Zunino all too well. In 2012, the catcher put forth one of the best seasons in school history, winning both the Dick Howser and Golden Spike Awards. Likewise, he parlayed his collegiate success into being taken No. 3 overall in the 2012 MLB Entry Draft, being taken by the Mariners. Here, he spent six seasons before being granted free agency, where he returned to the sunshine state and signed with the Rays.

MIKE ZUNINO HAMMER TIME AND IT IS QUIETER THAN A FUNERAL IN THE BRONX pic.twitter.com/EX10vHk3Ad

2021 sees a career year for Zunino. Chiefly, his 33 home runs are the most ever by a Rays catcher. With that, him and Pete Alonso became the first duo from the same college program to hit 30+ homers within the same season. Additionally, 2021 saw the catcher’s first All-Star appearance, with a solo moonshot HR on his first at bat. Similar to the two other Gators, Zunino set numerous career highs in 2021. Correspondingly, he saw a career high OPS of .860. Zunino figures to split time with backup Francisco Meija during the 2021 postseason.