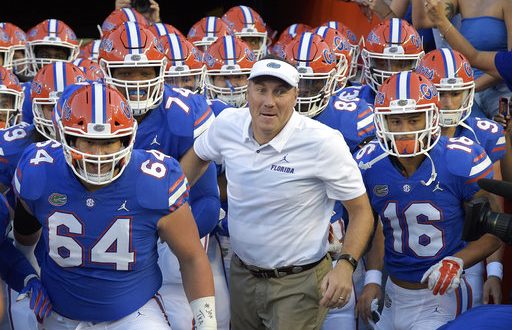 Last week, the No. 10 Gators lost their second game of the season 20-13 against unranked Kentucky.   This was the first time that the Kentucky Wildcats had beaten the Gators at Kroger Field since 1986.

Coming into the game ranked No. 10, the Gators had a large target on their back, especially after their performance against No. 1 Alabama.  But the Wildcats were undefeated, and wanted to keep it that way.

The game started well for the Gators, they were able to find the scoreboard first.  By the time halftime came around, the Wildcats were up 10-7, and were able to keep this lead for the remainder of the game.

One of the biggest reasons for this upset was the fact that the Gators had 15 penalties, eight of which were false starts.  The Gators lost a total of 115 yards.  The last of these penalties proved to be fatal for the Gators.  Emory Jones was able to bring his offense to Kentucky’s 5-yard line with 31 seconds to go and 1st and goal.  A four-yard loss from a swing pass and a false start left the Gators 4th and goal from the 8-yard line, and ended with an incomplete pass

This loss, in addition to their loss against Alabama, has made the Gators’ chances of making the playoffs slim.

Not Repeating the Past

In 2017,  Florida started their season strong with three straight wins against Tennessee, Kentucky and Vanderbilt.  However, a 16-17 loss against LSU triggered a four game losing streak and an overall season record of 4-7.  Senior tight end Kemore Gamble was there for the 2017 season, and says that the loss against Kentucky will not effect the rest of their season.  He’s confident in his team and says they won’t let this game get to them.

Although disappointed by the loss, Gamble says you can’t blame anyone for the loss, they lost as a team.

Gamble said that the team’s energy has been high in the locker room and during practice this week, and they’re ready to get back on the field against Vanderbilt.

The Kentucky game is now in the past, and the Gators will continue to work hard and stay focused.

On Saturday, the Gators will host Vanderbilt in hopes of gaining a win after the devastating loss to Kentucky.  The Gators are now 3-2 and the Wildcats are 2-3.

Jolie Katzen is a third-year Journalism major with a focus on sports media at the University of Florida.
Previous Boone faces uncertain future with Yankees
Next Chris Taylor and the Dodgers Walk-Off into NLDS