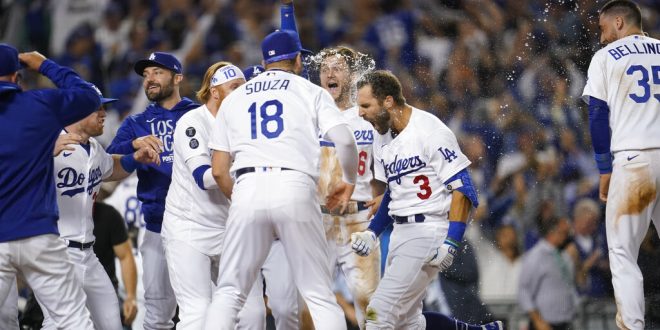 Chris Taylor and the Dodgers Walk-Off into NLDS

The winner-take-all National League Wild Card game did not disappoint as the Los Angeles Dodgers walked it off against the St. Louis Cardinals Wednesday night 3-1. With the game tied at one in the bottom of the ninth, Chris Taylor crushed a two-run homerun to send the Dodgers to the National League Division Series against the Giants.

Taylor, who didn’t enter the game until the seventh inning, took a hanging slider 420-feet deep into left field at a sold-out Dodger Stadium. Before Taylor could even touch first base, the Dodger’s bench had cleared and were running for home. There was no doubt that ball was gone.

“I was trying to hit a single,” Taylor said in a post-game interview. “If you think small, big things will happen.”

Justin Turner put L.A. on the board with a solo shot in the bottom of the fourth. The hit marked Turner’s 13th post-season homerun, a franchise-best. Cody Bellinger, having quite a night himself, set the stage for Taylor’s heroic hit in the ninth. Bellinger got on base with a two-out walk against left-hander T.J. McFarland. The Cardinals would opt to switch pitchers, but just four pitches later the game was over.

Defense Wins Ball Games (Except When it Doesn’t)

St. Louis jumped to an early lead in the top of the first. With runners on first and third, Max Scherzer threw a wild pitch and the Cardinals scored on the pass ball. The Cardinals wouldn’t score any more runs after that, leaving 11 runners on base.

St. Louis relied solely on their defense to hold the lead, which put up a strong fight against a stacked L.A. lineup. Starting pitcher Adam Wainwright threw for 5 1/3 innings and logged five strikeouts.

Infielder Tommy Edman led the Cardinals on both sides of the ball, making clutch plays in the field and getting on base three times. The leadoff batter also had two stolen bases and scored the only run for St. Louis. Edman turned a bases loaded double play in the bottom of the third to get the Cardinals out of the inning.

The Cardinals continued to play clean defensively with several jumping catches and sliding grabs, but it wasn’t enough to stop the Dodgers.

The St. Louis Cardinals’ were sent home with their season over. The Dodgers will now face the San Francisco Giants in the best-of-five National League Division Series as the NL’s two best teams square off. Game 1 is set for Friday night.

For the very first time, the @Dodgers and @SFGiants will meet in the #postseason.