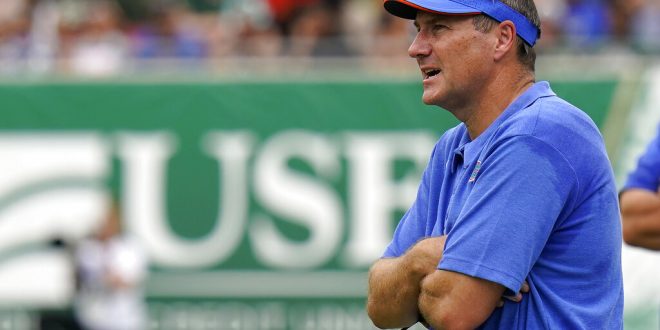 Following Saturday’s 49-42 road loss to LSU, Florida football fell out of the AP Top 25 for the first time since week five of head coach Dan Mullen’s debut season in 2018.

The Gators crept into the top-10 just three weeks ago before they lost to Kentucky by a touchdown.

#Gators likely to be unranked in the AP Poll for the first time in 53 weeks under Dan Mullen.

Mullen called the loss to LSU “really disappointing” as it brings Florida’s conference record to 2-3, which ranks fourth in the SEC East. After the game, Mullen described how losing the turnover battle ultimately cost the Gators.

“[We had] three turnovers that led to 21 points and then the fourth one there at the end of the game,” Mullen said.

Just two weeks after they were flagged 15 times for over 100 yards, the Gators committed no penalties against LSU. Still, Florida’s defense surrendered over 300 rushing yards. Mullen stressed the importance of playing well in all facets from start to finish given the strength of competition in the SEC.

“In this league, you’re playing great teams week in and week out. You’ve got to play solid for four quarters and we weren’t able to do that”

With a 4-3 overall record, Mullen called the five remaining games big and hopes his team can bounce back.

“We’ve got to turn around, we’ll see what type of team we are,” Mullen said.

After the LSU loss, Florida wideout Justin Shorter admitted the Gators must improve in order to finish the season strong.

“We’ve just got to go back to the drawing board now and keep working hard that way we can win these last five games,” Shorter said.

The Gators have a bye week before they travel to Jacksonville to face the nation’s top team — Georgia — on Oct. 30.

In November, Florida will alternate away and home games against four unranked opponents: South Carolina, Samford, Missouri and FSU.

Hello, I am currently a junior at UF studying sports media journalism with a concentration in Political Science. I contribute web and radio content weekly for WRUF ESPN Gainesville. Be sure to check out some of my recent articles!
Previous Pat Dooley’s ‘Back 9’ October 18th
Next UF Freshman Leanne Wong shines in the World Gymnastic Championship