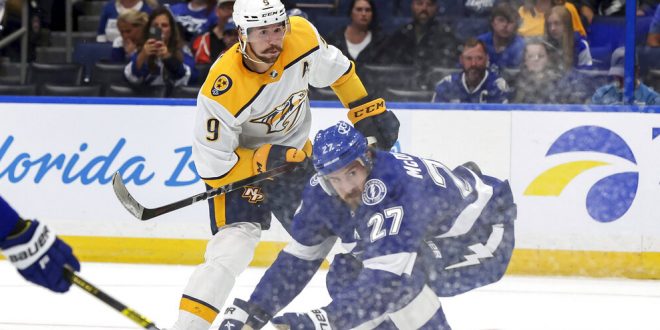 Is it possible?  Could they really do it?  Heading into 2021-2022 NHL season, the talk around the league has been whether or not the Tampa Bay Lightning can complete the three peat.  They would be the first team since the 1980-1982 Islanders to do so.

Two seasons ago, the Panthers lost during the first round of the bubble formatted playoffs.  Last season, they were eliminated by the Lightening in six games.  Now, this year, the Panthers finally feel like they have the pieces needed to get over the hump and dethrone the defending champions.

Unleash the Kraken.  In June of 2016, the NHL owners voted to expand the league and add the Las Vegas Golden Nights.  The next season, they were playing in the Stanley Cup Finals.  Could the same reign true for the NHL’s newest team, the Seattle Kraken?

Via the expansion draft and free agency, the Kraken were able to acquire the pieces necessary to be a successful hockey team.  Most notably, they added Mark Giordano and Philipp Grubauer.

Giordano, a 37 year old defensemen, provides the team with elite veteran leadership.  Grubauer, coming from the Avalanche, just completed a season being the goaltender on arguable what was the best team in the league.

While the Knights achievements during their first year might be impossible to replicate, the Kraken certainly have the pieces needed to compete.

Aside from the teams in Florida and the Kraken, there are many other teams with the potential to make some noise this year.

Could it be their time?  Under Barry Trotz, the Islanders have overtaken the Rangers as New York’s best team and are poised to make a deep postseason run.

Additionally, look out for the Boston Bruins.  Although they are getting older, the Bruins have the same core that has made them one of the best teams in the league for the past decade.

William Silverman is a junior at the University of Florida from Philadelphia who is interested in pursuing a career in business, communications and journalism.
Previous Blowout in Boston: Red Sox Dominate Astros 12-3 in Game 3 of ALCS
Next NBA Tips Off the Regular Season