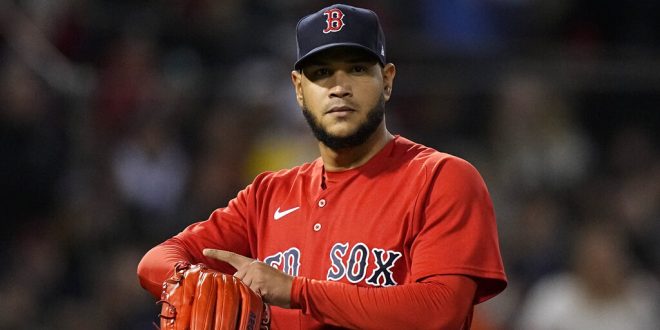 Alex Cora was not pleased with Eduardo Rodríguez after he mocked Carlos Correa. pic.twitter.com/QCSHEz7lfE

Red Sox starting pitcher Eduardo Rodriguez echoed this statement Monday, tapping his wrist as he left the mound. Evidently, such a gesture mimics Astros infielder Carlos Correa’s taunts from Game 1 of the ALDS. Now, after a 12-3 victory in Game 3, the Sox are the one’s doing all the taunting. Behind four home runs from the offense and seven K’s from Rodriguez, Boston took a 2-1 series lead. Yet, sitting two wins away from the World Series, manager Alex Cora wants Rodriguez and his team to remain humble.

It didn’t take long for the Red Sox to get going. Significantly, a high-scoring bottom of the second inning fueled a rally. A rally indeed, as Christian Vazquez began the scoring barrage by bringing in Alex Verdugo after a single to right field with bases loaded. Now, 1-0, Christian Arroyo grounds into a fielders choice to second, bringing in JD Martinez to make it 2-0 Sox. But, the crack heard around New England saw Kyle Schwarber hit a grand slam, making it 6-0 Boston.

With the dinger, Boston became the first time in MLB history to hit three grand slams in a playoff series.

Yet, the scoring didn’t stop in the second. Accordingly, in the bottom of the third Vazquez drove in another run, making it 7-0. Following,  Arroyo sent a ball 399 feet over the green monster, extending the lead to 9-0. However, the Astros were able to score some runs in the fourth. Without doubt, Kyle Tucker hit a 413 foot homer to right field, bringing in two base runners and cutting the deficit 9-3.

If these Red Sox are anything, it’s resilient. Likewise, they kept running up the box score throughout the game. Martinez hit a homer bringing in Rafael Devers in the sixth while Devers sent a ball 372 feet over the monster in the eighth. Overall, Boston hit four home runs on the game, in a performance Cora calls almost perfect.

Two games, all of which separates the Red Sox from their second World Series appearance since 2018. In 2018, the Sox parlayed the American League’s best record into a World Series victory over the Dodgers. Yet, due to a sign-stealing scandal, manager Alex Cora was forced to sit out the 2020 season. Now, returning in 2021, the Sox look reminiscent of the 2018 squad, with a deep lineup and strong starting rotation.

Players such as Kiki Hernandez have fueled Boston’s run. In the postseason, he’s hitting .667 with three homer’s and a 1.788 slugging percentage. So, it was questionable when Cora decided to pull him in the sixth. But, the skipper joked his postseason star has been running the bases too much recently. Markedly, Hernandez’s big bat, along with strong play from Devers and Boegarts, has helped the Sox scorching offense.

With two wins left needed for a shot at the AL Pennant, Cora knows his team needs to remain focused on one game at a time.

Sam Petosa is a Journalism major pursuing a Specialization in Sports and Media at UF. The South Florida native produces daily shows for WRUF, including "Sport Scene with Steve Russell, and "The Tailgate." In addition, Sam provides weekly sports updates for WUFT News and radio Sportscenter's for WRUF radio. Sam has been a writer at ESPN Gainesville since January 2020.
@sampetosa5
Previous Possible Ed Orgeron Replacements
Next NHL Season Outlook