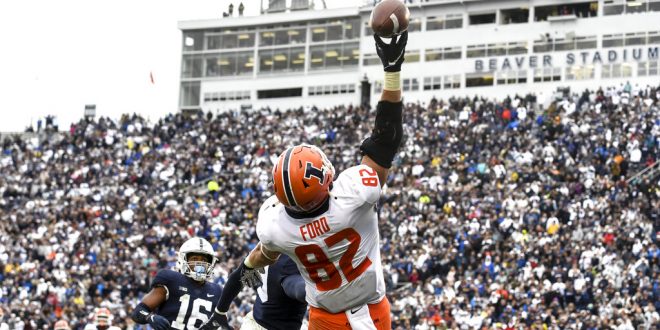 Week eight of the college football season brought some shakeup to the AP Top 10.

There were two Top 10 upsets on Saturday and two new teams–Iowa and Ole Miss–entered to take their spots. Iowa jumped back into the Top during their bye week 10 thanks to losses in front of them. Iowa lost to Purdue last weekend and fell nine spots to number 11. The Hawkeyes are on the road in Madison for a matchup with the Wisconsin Badgers this week.

Meanwhile, Ole Miss beat LSU to catapult themselves into the Top 10 for the first time this season. The Rebels head to Auburn to take on the Tigers on Saturday.

The two top-10 upsets this past weekend included a game never seen before, and a late comeback in a conference matchup. Here is a look around college football in week eight, as well as what is head in week nine.

The new college football overtime rules were on display for the first time in Happy Valley. Under the new rules, after just two overtimes teams go back-and-forth attempting two-point conversions from the three-yard line.

Adjusting the overtime rules has been a priority for the NCAA since LSU and Texas A&M played seven overtimes in 2018. The idea is to cut down on the amount of snaps played and prioritize player safety.

The new rules led to something we had never seen before between Penn State and Illinois.

The teams traded field goals in the first two overtimes, then both teams failed to convert from the three-yard line until the eighth OT. It was a dumbfounding lack of competence from either team, as the game was just 16-16 heading into 8OT.

By that point, Illinois had put in backup QB–Brandon Peters–in place of starter Arthur Sitkowski, who went 8-19 for 38 yards and an interception. After stopping Penn State on their attempt in 9OT, Peters rolled to his right and found Casey Washington in the back of the end zone to win 20-18.

Finally, the longest game in college football history had come to an end.

The Illini handed Penn State their second loss of the season, ending their hopes of a College Football Playoff run. The Nittany Lions fell from seventh-ranked to 20th-ranked following the upset. It only gets tougher for the Lions, who head to Colombus to take on number five Ohio State on Saturday.

Aimes Magic Gets To Oklahoma State

It feels like every year Iowa State pulls off a big upset at home. That is why their upset over Oklahoma State felt like business as usual for the Cyclones on Saturday.

How sweet it is! pic.twitter.com/gnfwvyHLKA

The win got Iowa State back into the Top 25 for the first time since their loss to Baylor in week four. It also gets them right back into the thick of the Big 12 race, as they are tied with Baylor and Oklahoma State at 3-1 in conference. Oklahoma leads the Big 12 with a perfect 5-0 conference record after week eight.

The game was the seventh straight matchup between the Cyclones and Cowboys decided by seven points or less, per ESPN.

Iowa State’s quarterback Brock Purdy was the star of the game in week eight, completing 81.8 percent of his passes for 307 yards and two scores.

However, it was the defense that came up big for the Cyclones in the end. After taking a 24-21 lead with 5:29 left, Iowa State’s defense stopped the Cowboys twice to secure the victory.

All three of the teams tied for second place are still yet to play the conference-leading Sooners. Those three games are the final three on Oklahoma’s schedule and will determine who comes out on top in the Big 12.

Looking Ahead To Week 9

There are three ranked matchups on next week’s slate, one of which has huge implications.

Oct. 30's going to be a fun day to watch CFB. Now announced:

The two teams are a combined 14-0 but have just one combined win over a ranked opponent. That lone win came in Week 3 when the Spartans crushed the Miami Hurricanes 38-17.

Despite going on the road, the sixth-ranked Wolverines enter as a four-and-a-half point favorite over the Spartans.

Staying in the Big 10, Penn State heads to Ohio State for a meeting with the fifth-ranked Buckeyes. It is always a big game when these two teams meet, but Penn State’s loss this past weekend ended hopes of a Top 10 matchup.

Nevertheless, the Nittany Lions could virtually end the rival Buckeyes’ season with a loss. A second loss would all but ruin the Buckeyes changes of reaching the College Football Playoff after their week-two loss to Oregon.

The final ranked matchup of the weekend is between the 10th-ranked Ole Miss Rebels and the 18th-ranked Auburn Tigers. The Rebels can hold off Auburn for second place in the SEC West and keep their hopes of a division title alive. If Alabama slips up again and Ole Miss runs the table, they could swoop in and take the division.

They will need to pick up an important win over the Tigers on Saturday to keep that dream alive.

Ethan Budowsky is a fifth-year telecommunications student at the University of Florida. He covers Major League Baseball for Just Baseball Media and previously covered the Miami Marlins for their SB Nation affiliate, Fish Stripes.
@ethanbudowsky
Previous Pat Dooley’s ‘Back 9’ October 25th
Next Around the NFL: Week 7