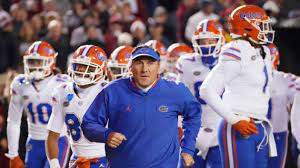 Dan Mullen on parting with John Hevesy and Todd Grantham: "It's always hard. Those guys are friends of mine. I have a lot of respect for them. Both excellent football coaches.

My responsibility is to do what's best for the Florida #Gators. That comes above it all."

“It’s a tough situation,” said defensive lineman Zach Carter. Despite his appreciation for Grantham, he believes Coach Mullen made the right decision.

For a team that went from top 10 in the AP Poll to quickly becoming unranked, a change was anything but surprising.  The loss to LSU triggered a losing streak that the now 4-5 Gators can’t seem to find their way out of. Carter says the last few games have been hard on the team.

It is clear that the last straw for both Coach Mullen and the players was the blowout the team experienced last weekend. This will hopefully be the spark the Gators needed to end the season strong.

Finishing Out the Season

The Gators only have three games left in the regular season. With so little time left, they may need more than just a coaching change to bring their record up. However, regardless of the changes, Carter says the Gators still have a lot to play for.

This week, the Gators are back in the Swamp against unranked Samford. If Carter is right, the team will use the news of these changes to put them in the competitive spirit needed for a win. If Mullen is right in his decision making, we should see an improvement over the next two weeks in preparation for the Florida State rivalry game. Soon, we should see an improvement in the team similar to the way they played in the beginning of the season.