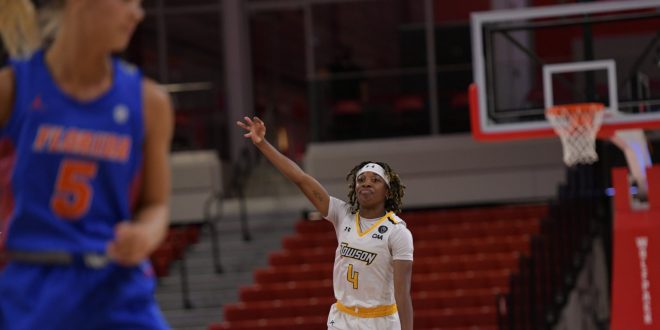 A lack luster start forces the Gators to drop their first road test of the season. Florida women’s basketball team starts off the Preseason WNIT losing to the Towson Tigers, 87-70.

After trailing 14-12 heading into the second quarter in their season-opener against Georgia State, the early-game struggles continued Friday for the Gators.

Fortunately, the Gators they were able to shoot over 50 percent from the field to win 84-70.

Towson Tigers Gets Hot From Three

Entering this matchup, the Tigers were coming off an explosive night offensively beating Frostburn 113-59, having six players scoring in double figures.

To start, Florida’s inability to defend the perimeter as the Tigers fired from behind the arc was ultimately their downfall. A quick 13-0 run early first quarter ignited the Tigers to a 21-3 lead. An Aleah Nelson three-pointer with 5:47 remaining put the tigers up by 18.

While, the Florida shot 6 of 18 to start before a Tigers onslaught from deep, making seven of their first eight three-pointers in the first quarter. Also, Towson (2-0) capitalized on six Gator turnovers totaling 14 fast break points for the Tigers.

Florida head coach Kelly Rae Finley immediately went to a man on man full court press defensively, which was the Gators secret weapon to help them pull away from Georgia State.

Well, that was fun.

Nelson ends with 39 points, 8 rebounds, 8 assists and a building record.

However, it wasn’t the case in Reynolds Coliseum Friday as the Tigers headed into the second quarter leading, 37-20. Anytime the Gators seemed primed for a possible comeback a gut punching Tigers three halted their run.

In the fourth, a Lavender Briggs jumper with 6:30 left put the Gators down 73-62. Nevertheless, the Tigers fired back with a Ryann Evans three to put the deficit at 14.

All in all, Finley and the Gators just wasn’t able to muster enough stop defensively letting Towson shoot 63 percent from behind the arc for game.

Down, but not out. Work to do in the fourth!#GoGators pic.twitter.com/OuxjbLRheu

Towson’s guard Nelson seemed to have anything she wanted offensively as she dissected the Gators full court press. To continue, Nelson finishes the game leading all player in scoring with a career-high 39 points with eight rebounds and eight assist. Also, the junior guard now averages a team high 29 points through two games as she focuses on Wofford (0-1) Sunday.

For the Gators, leading the team in points was  sophomore forward Jordyn Merritt. Merritt achieved a career-high 18 points and recorded her second career double-double with 11 rebounds.

The former five star recruit picked up the scoring for Florida as veteran guard Kiara Smith is battling some back issues. To finish, Smith ended the the game with eight points after her game-high 23-points against Georgia State.

.@JordynDMerritt drains a triple and forces the Towson timeout!

Now, the Gators looks to regroup as they have the day off Saturday before they suit up against No. 5 North Carolina State (0-1). Florida does concludes the tournament on Monday against Wofford.