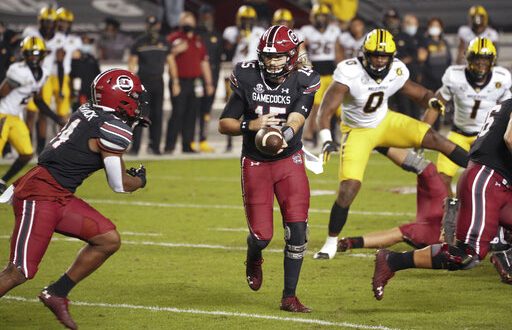 South Carolina picked up their fifth win with a resounding defeat of SEC East rival Florida, 40-17, last Saturday . That victory set up a pivotal matchup against another division foe on the road this Saturday at Missouri at Faurot Field at Memorial Stadium.

South Carolina is coming off with a lot of momentum after a strong win over the Gators. Florida was favorited by 21 points yet fell to the Gamecocks 40-17 last week. In South Carolina’s previous three games, they lost by 30 to Texas A&M, beat Vanderbilt by just one point, and lost to Tennessee by 25. They need a win against Missouri to keep bowl eligibility.

In the game against Florida, South Carolina out-gained the Gators 459 to 340 in the contest, and they piled up 284 yards on the ground. Leading the way was running back, Kevin Harris, who had 128 yards while running back, Zaquandre White, had 111. This came as a shock as South Carolina is 91st in the nation in rushing.

South Carolina is 95th in passing and threw for just 176 yards in the win. Quarterback Jason Brown got the start as Luke Doty is out for the year. He threw for 176 yards with two touchdowns and no interceptions in the win.  On the defensive side, the Gamecocks defense is ranked 14th against the pass. In addition, they are 78th against the run, and 55th in points allowed, giving up just 23.7 points per game.

Head coach, Shane Beamer, says that the team is coming into this game with loads of momentum after the big win against Florida. They have been working hard at practice and hope to improve from the last game.

Missouri has had a below-average season this far. They come in at 4-5 overall, but they are just 1-4 in league play. Missouri needs two wins in their last three games if they hope to get a bowl invite. They do not have the easier road as they play Florida next, followed by Arkansas on the road.

The Tigers hope to get a win against South Carolina after an awful loss against the Bulldogs. Missouri comes off a 37 point road loss to Georgia and oddly enough it was their first win against the spread this year. They have a solid passing game, that ranks 36th in the nation. Missouri has 264 yards per game through the air so far. However, they had just 152 yards last week against Georgia.

The real question moving into the game against South Carolina, is who will play quarterback for Missouri?  Tigers quarterback, Brady Cook, had 78 yards passing and quarterback, Tyler Macon, had 74 yards as both played in place of Connor Bazelak, who was injured and is still listed as questionable. Bazelak has thrown for 2130 yards with 13 touchdowns and eight interceptions on the year.

The defense is where the Tigers have struggled. They have 123rd in yards allowed, 129th against the run, and 121st in points allowed at 36.8 points per game. The run defense could be in for a long game against a South Carolina team that just ran for 284 yards on Florida.

These are two evenly matched teams, as proven by the 1-point spread, favoring Missouri. Both teams will compete to win for bowl eligibility.