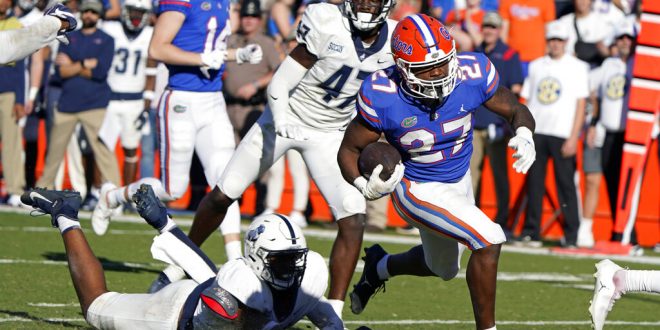 Florida running back Dameon Pierce (27) scores a touchdown on a 13-yard pas play past the Samford defense including safety Chris Edmonds (47) during the second half of an NCAA college football game, Saturday, Nov. 13, 2021, in Gainesville, Fla. (AP Photo/John Raoux)

Florida Gators football rallies in second half to beat Samford

The Florida football team is finally back in the win column for the first time since their homecoming game victory over Vanderbilt on Oct. 9. Despite a disappointing outing by the defense, the Gators snapped a three-game losing streak with a 70-52 victory against Samford on Saturday.

Check out the highlights from today's victory over Samford! #GoGators pic.twitter.com/CDspTPipBt

Shootout in the Swamp: Florida Gators vs. Samford Bulldogs

The first two quarters were marked by plenty of back-and-forth scoring with the Bulldogs. More importantly, the half saw a deflated performance by Florida’s defense. The Gators gave up 42 points to Samford in the first half, which is the most allowed by Florida in program history.

Quarterback Emory Jones made the start for the Gators and delivered a career performance.  Jones completed 28 of 34 passes for 464 yards and six touchdowns. Further, he ran for 86 yards and one score. In total, Jones posted seven touchdowns and accounted for 550 yards for the first time in his career.

Nonetheless, the Gators trailed the Bulldogs 42-35 heading into halftime.

The Gators gave a more energized performance to kick off the second half. Florida opened up with a toss to Dameon Pierce for a 49-yard touchdown to even up the score 42-42. Pierce ran seven times for 78 yards and three scores.

Meanwhile, it was a historic day for Samford, with their 52 points tying the record for the most points ever by an FCS opponent against an FBS team since 1971. On the other hand, the Gators gave up a season-high 530 yards due to lapses by the defense.

Above all, Florida was able to avoid a potential upset by Samford. Head coach Dan Mullen talked about what the win means to the team.

When asked about what the conversation was in the locker room at the half, Mullen’s answer was simple.

Players respond to the win

Florida safety Mordecai McDaniel expanded upon the conversation at the half and how the team needs to stay in the mindset of making plays.

And as for the mood of the team on the sideline, Pierce explained how there was never any doubt about winning the game. Rather, it was a matter of how the Gators were going to win.

Pierce shared how the team will celebrate all wins, all of the good, bad, or ugly. But the biggest takeaway going forward from today will be not letting opponents keep such a close game.

What’s next for the Florida Gators

The Gators will look to build on their success as Florida will be back on the road in Week 12. The Gators will have a date with Mizzou with kick-off is set for 4:00 p.m. on Saturday, Nov. 20 at Faurot Field at Memorial Stadium.

Tori Edwards is a fourth-year Telecommunications student specializing in News with an outside concentration in Sport Management at the University of Florida. Tori works as an author and reporter for WRUF.com and is the voice of trendings on Wednesday mornings on ESPN 98.1 FM - 850 AM WRUF. You can reach Tori at victoriaedwards@ufl.edu.
@ToriEdwardsNews
Previous P.K. Yonge Dominates Crescent City in Class 3A Regional Quarterfinals
Next Gators Lose Big at NC State in Preseason WNIT Classic 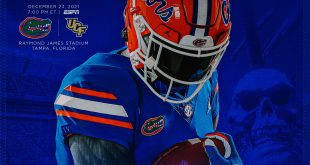