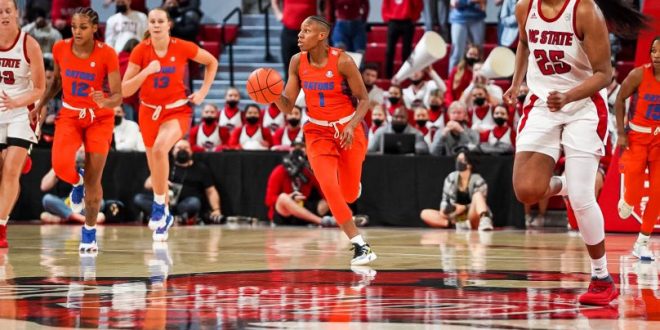 The No. 5 NC State Wolfpack women’s basketball team (2-1) dominated the Florida Gators (1-2) en route to an 85-52 victory Sunday afternoon. The Wolfpack rode a dominant first quarter to victory on their home court.

NC State’s Elissa Cunane led both teams with 18 points and 12 rebounds in the victory. The senior center used her size to dominate the Gators inside the paint, as the Wolfpack outrebounded the Gators 41-30 in the game.

The Wolfpack also had an excellent game shooting the three-ball. Kai Crutchfield led the way beyond the arc, making all four of her three-point attempts and putting up 17 points in the contest. As a team, NC State made 11-of-18 from the 3-point line.

Kiki Smith bounced back from a quiet game against Towson on Friday with 16 points for the Gators. Nina Rickards also played well in the loss with 12 points, 9 of which came in the third quarter.

The Gators kept the game tight early in the first quarter and only trailed the Wolfpack 15-14 with just under three minutes to go in the period. But then NC State went on a 14-1 run in the last 2:41 of the quarter to jump to a 29-15 lead.

The Wolfpack kept the pressure on in the second quarter, as well, and took a 48-27 lead into halftime. Kayla Jones nailed a 3-pointer at the first-half buzzer to put an exclamation point on a dominant start.

Facing a 21-point deficit at halftime, the Gators cut into the deficit in the third quarter. Rickards poured in eight points in the period, and Florida outscored NC State 14-10. But the Wolfpack made 10-of-15 field goals in the final period and all five of their 3-point attempts to close out a dominant victory.

Season at a Glance

Sunday’s game marked the Gators’ second in the Preseason WNIT Classic in Raleigh. Florida lost their first game of the tournament 87-70 to Towson on Friday.

So, after a double-digit victory against Georgia State, the Gators have dropped two straight. Meanwhile, the Wolfpack have won two straight after an opening loss to No. 1 South Carolina.

NC State went 22-3 last season and won the ACC Tournament for the second straight season. With the win against Florida, Wolfpack coach Wes Moore reached 750 wins for his career, 7th most among active coaches.

The Gators will close out the tournament with a game against Wofford on Monday.

I'm a third-year student at the University of Florida passionate about storytelling and sportswriting. My goal is to work in communications for a professional sports team after I graduate.
Previous Florida Gators football rallies in second half to beat Samford
Next Gators Men’s Basketball Defeats Florida State 71-55