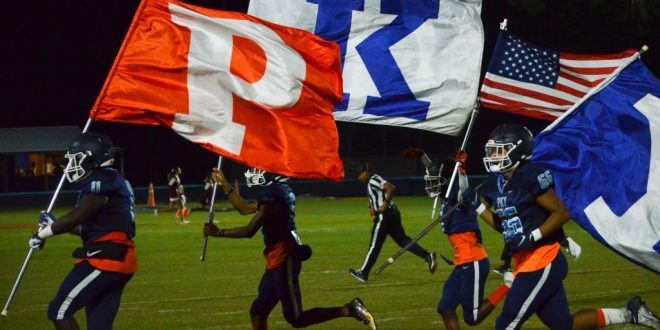 The Scene Was Set

The two-class 3A teams, both coming off of 7-3 seasons, met as the No. 4 and No. 5 seeds, respectively. 4-seed P.K. Yonge came into this one off of a six-game win streak. 5-seed Crescent City ended their regular season on a three-game streak of their own. On paper, this was as close of a Round 1 matchup as they come—between two seemingly equal teams riding high on momentum. It was a beautiful Friday night for what was expected to be some quality high school playoff football.

However, P.K. Yonge took whatever “expectations” anyone had for this game, chewed them up, and spit them out… all over the scoreboard… all…night… long.

P.K. Yonge Junior Jaren Hamilton, fresh off of an offer from Tennessee, refused to allow the Blue Wave to lose their most important game of the year. He returned the opening kick all the way, giving P.K. Yonge a 7-0 lead 15 seconds in. At this point, with a seven-point spot at home, Hamilton provided his team the initial momentum that would only get stronger and stronger as the game continued.

Junior @PKYFootball WR, FS Jaren Hamilton is a force to be reckoned with.

Inescapable Deficit at the Half

After Hamilton’s initial return, the P.K. Yonge defense would go on to secure four straight defensive stops—each paving the way for a Blue Wave touchdown. Running-backs Rashaun Walden and KJ Wooden found the pylon early, setting the stage for a pair of touchdown passes from quarterback AJ Small to wide receiver Cameron Pedro.

Up 35-0, the Blue Wave defense continued to impress in what was their best outing of the season.

Junior corner Deldrick Goston intercepted Crescent City with a few minutes left before the half. This would lead to what may have been the most eye-opening play of the night; quarterback AJ Small, breaking through what truthfully should have been a sack, rushed 30 yards through what seemed like every defensive player on the field to put P.K. Yonge up 42-0 at the half.

AJ Small (@AaronSmallJr1) breaks through what would’ve been a sack on a lot of other QBs and rushes 30 yards for the TD.

Score’s up to 42-0 now. I don’t think anyone was expecting this — wildly impressive half from @PKYFootball.@FlaHSFootball @ThePrepZone @ESPNGainesville

Considering the way P.K Yonge had played thus far, the way they came out of the half was no surprise. Coach Doelling and the rest of the Blue Wave came into this game with a goal and were well aware that halftime was only halfway toward that goal.

After their 600th defensive stop of the evening, P.K. Yonge completed their first offensive drive of the 2nd half with a rushing touchdown from Courtney Brown ii — the Blue Wave’s sixth different beneficiary on their seven total touchdowns.

The ensuing drive, Crescent City’s closest opportunity to get on the board up to this point resulted in a red-zone interception for the Blue Wave, their second of the game.

Eventually, Crescent City would finally get on the board with just over three minutes remaining.

And the Crowd Went Wild

Here’s some good news for any sports fans out there, for anyone who loves and roots for and supports a team: you matter. You being there and showing support for your team matters. Fans affect and change the game. Home-field/home-court advantage is real — and it was wild throughout this entire game.

The P.K. Yonge Blue Wave, riding a now seven-game win streak and as much momentum as any team in their class, will advance to their tallest task yet: top-seed Trinity Catholic in the regional semifinals.

The two teams did meet in the preseason. Though, Coach Doelling looks at that game as being in another time.

“Light the film from our kickoff classic on fire.”

Here’s what he had to say on that game and their upcoming round-2 matchup with Trinity Catholic:

It appears as though P.K. Yonge has hit their stride at the right time. Coming off a six-game win streak to close their regular season, finding themselves in a Round 1 quarterfinals matchup against a worthy opponent, convincingly took care of business Friday night.

However, next week will be the true test for Coach Doelling, Jaren Hamilton, AJ Small, and company.

Are they a real contender, or will Trinity Catholic take out the Blue Wave’s flame?

Zackary is currently studying Journalism: Sports & Media at the University of Florida. He has years of experience providing multifaceted online content for various news outlets, as well as experience running multiple sports-related social media accounts with high followings. He is now doing work for ESPN Gainesville as a Sports Coordinator/Editor and Producer. He was a Staff Writer and Digital Content Creator in the past. Zackary's planned graduation is May 2024. Please feel free to contact via email at zackaryweiss@ufl.edu or zackweiss48@icloud.com. Links to Zackary's social medias are directly below.
@zackaryweiss_
Previous Pat Dooley’s Grades: Samford vs Florida
Next Florida Gators football rallies in second half to beat Samford