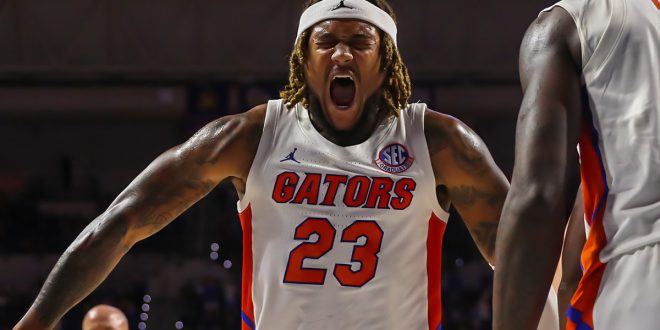 The Florida men’s basketball team gets a huge home win over arch rival Florida State on Sunday, beating the Seminoles 71-55.

Florida opened their season this past week hosting Elon in their first regular season game defeating them 74-61.

The last time Florida and Florida State played was last December when the Gators lost forward Keyontae Johnson who collapsed on the court in Tallahassee. The stunned Gators lost 83-71.

The Gators still didn’t have Johnson in this game but there was no doubt this team was playing for its injured teammate in an emotional home game.  The Gators started off slowly as there were 14 lead changes early in the game and at halftime Florida trailed 30-28.  But in the second half, the Gators imposed their will and got the win in front of a large and enthusiastic crowd.

Colin Castleton had a big night for the Gators with a double-double of 15 points and 16 rebounds, his fourth double-double as a Gator.  But he wasn’t the only star as this Gator team showed a toughness and a resilience that led them to this win.

The win snapped a seven game losing streak against the Seminoles.  And it marked coach Mike White’s first win over the Seminoles as well.

Florida State came into the game ranked 20th in the nation and with the loss falls to 1-1 on the year.  Malik Osborne led the way for the Seminoles with 18 points but it came in a losing effort.

The Gators are back in the O’Connell Center Thursday hosting Milwaukee for a 6 pm tip off.