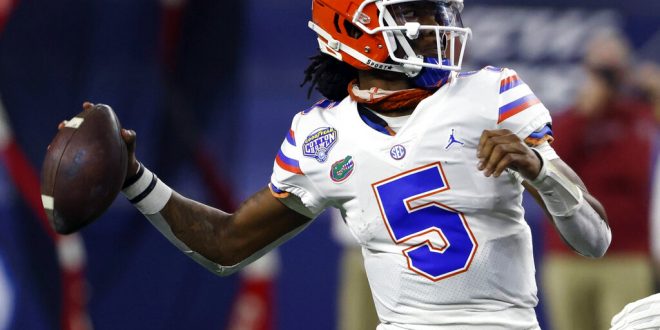 FILE - In this Dec. 30, 2020, file photo, Florida quarterback Emory Jones (5) throws a pass in the first half of the Cotton Bowl NCAA college football game against Oklahoma in Arlington, Texas. Jones first landed on Dan Mullen’s recruiting radar seven years ago. Jones was a high school freshman in LaGrange, Ga., and Mullen was scouring the country for another spread quarterback at Mississippi State. They bonded quickly, and when Mullen took over in Gainesville three years later, he asked Jones to join him. (AP Photo/Ron Jenkins, File)

The Florida Gators beat the Samford Bulldogs, 70-52, in a game predicted to be much less of a competition. The Gators started the season with a two-game winning streak, leading to a narrow loss against Alabama. After their loss to Kentucky, they have fallen to three other crucial teams.

The good, the bad and the ugly

Gators’ quarterback Emory Jones broke Tim Tebow’s 533-yard single-game record with an incredible 550 yards. He set the school record and added seven touchdowns to the board to tie the all-time touchdown record with four former Gators. Jones has had ups and downs this season but ultimately saved the Gators from another defensive disaster this game. Though his accomplishments from Saturday are unmatched, Jones was unhappy with how he played against Samford.

On the other end of things, the Gators’ defense had far fewer accomplishments than the offense. They allowed for the most points, 42, to be scored in any half and allowed for a season-high 530 yards.  This debacle came following Dan Mullen firing defensive coordinator Todd Grantham and run game coordinator John Hevesy. After the results of Saturday’s game, it is clear where the problems lie with the Gators.

This season, the position of starting quarterback was a question posed each week. There have been six weeks of uneven play under center for the Gators, switching between Jones and Anthony Richardson. Richardson was played as an option for every week he was not injured and was the starter against Georgia. But this week, Richardson was uninjured and only Jones played.

In their loss against LSU, Jones was benched after multiple incomplete throws and two interceptions. Richardson was able to tie up the game from a two-touchdown deficit. Though the Gators lost to LSU, Richardson was named the starter for the Georgia game because of his performance.

Richardson was unable to find success against Georgia, completing 12 of 20 passes for 82 yards with two costly interceptions. Mullen replaced him with Jones in the second half and he completed 10 of 14 for 112 yards. He was able to get a late touchdown run stripping Georgia of a potential shutout. Jones played the entire game against South Carolina under less than favorable conditions. Jones had tested positive with the flu that morning and a sprained thumb on his throwing hand. Still, he completed 17 of his 30 throws for 258 yards and two touchdowns.

Jones struggled with interceptions the first half of the season, which is the reason Richardson was substituted in so often. Over the last three games, Jones has been far more consistent. Of the three matchups, he threw only one interception against South Carolina. His improvement with accuracy and record-setting statistics from last weekend’s game has most likely secured his starting quarterback spot for the remainder of the season.