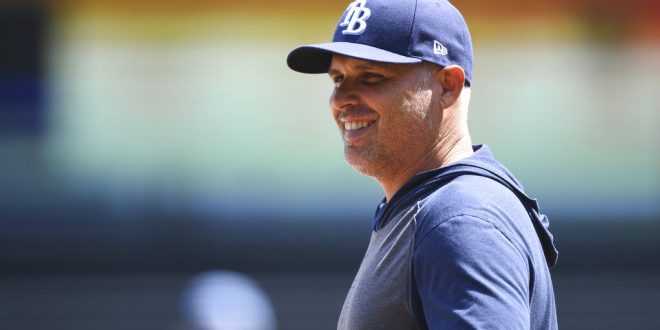 Managers Kevin Cash and Gabe Kapler took home the  Major League Baseball Manager of the Year award on Tuesday. Both managed their teams to the best record in their respected leagues.

In the National League, this marks the first award Kapler has won as a manager for the San Francisco Giants. However, for Tampa Bay Rays skipper, Cash wins his second AL honor puts him in the conversation in some baseball greats.

Votes were casted prior to the postseason where Cash received 19 of the 30 first place votes.

Gabe Kapler and Kevin Cash have been named 2021 NL and AL Managers of the Year pic.twitter.com/mHHtXO1fbL

Manager of the year awards typically issued to skippers who team played the best during the regular season. Suffering crucial season ending injuries in their bullpen, the Rays still managed to get the best record in the AL for the second consecutive year. For Cash, it was enough to give him the American League honor in back-to-back seasons.

Cash accomplished a feat only one other manager has every done in MLB history, which gives the question: has he punched his ticket to the Hall of Fame? Former Atlanta Braves manager Bobby Cox, prior to Tuesday, was the only manager to win this award consecutively. Cox established his Hall of Fame resume after taking the NL honor two years in the row from 2004-05.

Cox eventually lead the team for 25 years including a World Series Championship in 1995.

Now, the Tampa Bay skipper has one feat left to accomplish–a world title. The Rays were close to achieving such an accomplishment in 2020, however, Cash fell short and took criticism for pulling starting pitcher Blake Snell in Game 6.

Congratulations to Gabe Kapler and Kevin Cash on winning NL and AL Manager of the Year. 🏆

In 2021, Tampa finished with the AL’s best record before losing to the Boston Red Sox in the Divisional Series. Hopefully, Cash and the Rays can translate their regular season success during next years’ postseason.

Cash received 19 of the 30 first-place votes.

After helping guide the Giants to a franchise best 107 wins, Kapler wins the NL award in only his second season with the team. The Giants were able to beat out the Dodgers by a single game to take the NL crown.

In the past, the former outfielder managed Philadelphia for only two seasons before being fired in 2019.

Tampa Bay's Kevin Cash won Manager of the Year in back-to-back seasons, while the Giants' Gabe Kapler won the honor for the first time.

For the year, the Dodgers were able to prevail against Kapler and the Giants in the Divisional Series, 3-2, to advance to the NLCS. Looking back, Kapler is the first Giants skipper to win this award since 2000,  collecting 28 of the 30 first-place votes. 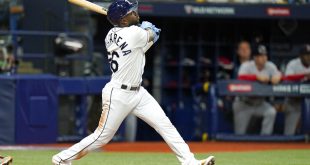