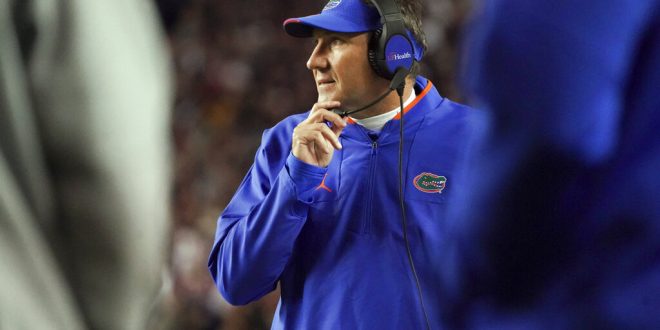 Less than 24 hours after the overtime loss to Missouri, the Dan Mullen era for Florida Gators football has come to a close.

Florida athletic director Scott Stricklin said in Sunday’s press conference that Mullen had the choice to stay for the FSU game. However, he opted to leave now to avoid being a distraction.

Stricklin said he made the decision this morning, and he said today he decided he was certain it was time for Florida to change directions.

Letting Mullen, his first football head coach hiring, go was a tough decision for Stricklin. But he said, in his position, he had to know when to make the change for the good of the program.

Stricklin said Mullen’s contract will be fulfilled as agreed upon. This includes a $12 million buyout.

Stricklin gave his reasons for choosing Knox, including his history of being an interim coach and how well he works with players.

During Sunday’s presser, Stricklin said he thought Mullen was still a good coach. However, this year is “symptomatic” of the issues that the program wants to fix.

Picking the Next Head Coach

Stricklin said Florida will take its time looking for the next head coach.

When asked what he expects out of the next head coach, Stricklin said, “to achieve at a high level for an extended period of time.”

Part of this will likely require improving the ability to recruit. Florida’s 2022 recruiting class is currently ranked 29th in the country, per 24/7 Sports. The Gators are 10th out of the 14 teams in the SEC as well.

For nearly the first three seasons Mullen was at the helm, the Gators were 29-6, winning the Peach Bowl and Orange Bowl. Since Dec. 12, 2020, which is the infamous loss to LSU in the Swamp. the Gators have gone on a 4-9 slump.

Whoever takes over next season will be Florida’s fourth head coach in 10 years.

Harrison is a sports coordinator at ESPN 98.1 FM/850 AM WRUF. He served as a beat writer for Florida Gators football for the 2019 and 2020 seasons. He also contributes to WRUF's Gainesville Sports Center segments and makes appearances on the Clash on Harp on Sports. Harrison has been a content writer for WRUF since January 2019 as well.
@HarrisonSmaj
Previous Gators Fall to Mizzou in Overtime
Next Gator Volleyball Honors Seniors in Sweep of South Carolina