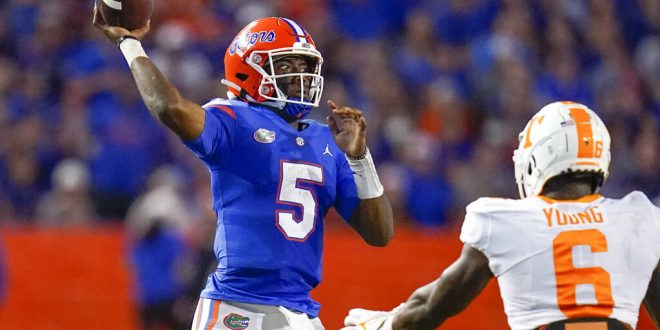 Bowl eligibility will have to wait. The Gators fell to Missouri, 24-23, in overtime on a do-or-die two-point conversion by the Tigers.

This is the first time the Gators were held to two wins in SEC play since 1986. On top of that, the Gators finish their SEC schedule with no win on the road in conference play.

Kickers Rule the First Half

The Gators opened scoring with a 42-yard field goal by Chris Howard. Mizzou tied it up 3-3 to end scoring for the first quarter.

Florida took back the lead with another field goal by Howard–this time for 26 yards.

Two Mizzou field goals put the Tigers up by three heading into halftime.

Back and Forth To the Finish

The Gators took back the lead early in the third quarter with a two-yard rushing touchdown by Dameon Pierce. Make it 13-9.

The defensive bout started to meet its offensive match, as Missouri took back the lead on a 41-yard touchdown pass by quarterback Connor Bazelak to tight end Niko Hea–16-13 Mizzou. Another Florida field goal evens it 16-16. The Tigers had the chance to win it in regulation, but Harrison Mevis missed a 46-yard field goal attempt.

Mullen chose to run out the clock while Florida was on the field to send the game to overtime. He said the plan was to go downfield, but a few slip-ups–literally–prevented it

For the first time since 2015, the Gators went to overtime. Hopes rose when the Gators pulled off a Trent Whittemore touchdown to Emory Jones. That isn’t an error. Whittemore’s second touchdown pass of the season was to the quarterback.

Down 23-16, Mizzou running back Tyler Badie forced through the Gators’ defensive line to make it 23-22. But Tigers head coach Eli Drinkwitz decided against the extra point. Mizzou was going for two. Bazelak lobbed a pass to his left and found tight end Daniel Parker Jr. for the game-winning 2-point conversion.

We’ll save the Dan Mullen talks for a later time.

The Gators head home to finish the season against rival Florida State. Since they won against Boston College, the game is a battle for bowl eligibility. Kick off is set for noon.

Harrison is a sports coordinator at ESPN 98.1 FM/850 AM WRUF. He served as a beat writer for Florida Gators football for the 2019 and 2020 seasons. He also contributes to WRUF's Gainesville Sports Center segments and makes appearances on the Clash on Harp on Sports. Harrison has been a content writer for WRUF since January 2019 as well.
@HarrisonSmaj
Previous Pat Dooley’s Grades: Florida vs Mizzou
Next Dan Mullen out as Florida Head Coach