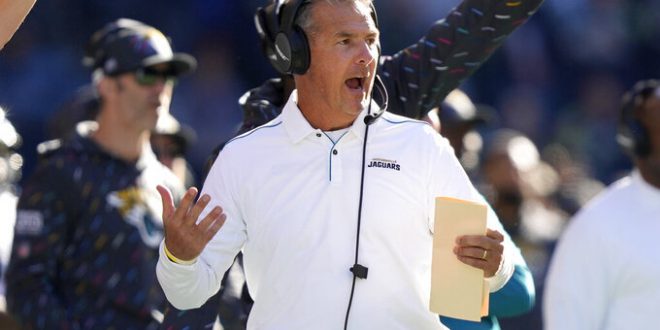 Jacksonville Jaguars head coach Urban Meyer reacts to a play during the first half of an NFL football game against the Seattle Seahawks, Sunday, Oct. 31, 2021, in Seattle. (AP Photo/Stephen Brashear)

After the team has been desperately looking to find stabilitYy this game did not go as planned for the Jags.

Rookie QB Trevor Lawrence has been struggling, but it isn’t fair to just point fingers at him. The lack of consistency between delivering and receiving on this team is highly perceptible.

The 49ers came in hot from the start opening the game with a 20-play field-goal drive that took up the majority of the time, and also scored on its first five possessions. Robbie Gould scored a 20-yard field goal putting San Francisco in the lead 3-0.

Early on in the second quarter, the 49ers extended the lead to 10-0 with a 25-yard run by Deebo Samuel. With less than nine minutes remaining Garoppolo finished the next drive with a six-yard pass to Brandon Aiyuk escalating the lead to 17-0.

After a penalty made by the 49ers, Jaguars kicker Matthew Wright cut the lead with a 30-yard field goal. Shortly after, Gould’s field goal was the final play of the half pushing San Francisco’s lead back to 17 points.

After halftime, the 49ers took a 27-3 lead after Garoppolo’s one-yard touchdown pass completed to George Kittle.

No other points were scored until the fourth quarter when Gould scored a 45-yard field goal with less than six minutes remaining putting the 49ers up 27 points. At the very end of the fourth quarter, James Robinson scored a touchdown, making the final score 30-10.

A Closer Look at the QB’s

Trevor Lawrence–aka No. 1 overall selection in the 2021 NFL Draft–completed 16 of 25 passes for 158 yards with no touchdowns or interceptions. The Jaguars had 83 total yards at half, by which time San Francisco led 20-3. The Jaguars finished with 200 yards of offense.

San Francisco quarterback Jimmy Garoppolo completed 16 of 22 passes for 176 yards with two touchdowns and no interceptions. The 49ers finished with 333 total yards and 25 first downs.