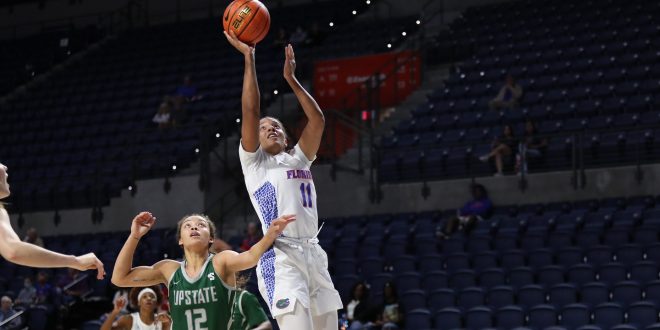 The Gator women’s basketball team hosted the USC Upstate Spartans to kick off their first game of the week on Monday before hitting the road and came away with a 76-54 win over USC Upstate.

The Florida women’s basketball team has gotten off to a nice start this season.  They entered this game with back to back wins at home, and now with Monday’s win marks it their third game in a row won at home. Prior to this match up the Gators took down the Grambling State Tigers 70-50.

Junior guard Lavender Briggs had another outstanding night for the Gators with 16 points, five rebounds, and four assists. Two other Gators were double figure scorers as Alberte Rimday had 11 points and Emanely de Oliveira scored 10.

Lavender Briggs on their teams effort.

The Gators ended the first half only leading by two points 28-26, but came out i the second half in a different direction going on a 15-0 run to begin the third quarter.

Lavender Briggs had this to say about their second half performance.

Guard Jeriah Warren scored seven points off the bench, giving the Gators a nice spark.  Entering the game with great energy and only playing a majority of the fourth quarter she helped the Gators go on a 8-0 run expanding their lead to 25.

USC Upstate entered this game with a win and a 41 blow out over Columbia International University. In this game, two players were double figure scorers for the Spartans as Molly Coleman scored 12 points and Terah Harness added 10 points but it was not enough to take down the Gators.

Florida will hit the road and travel to San Juan, Puerto Rico to play in the San Juan Shootout where the first game they play will be against St. Louis on Friday and then on Saturday the Gators will take on George Washington.