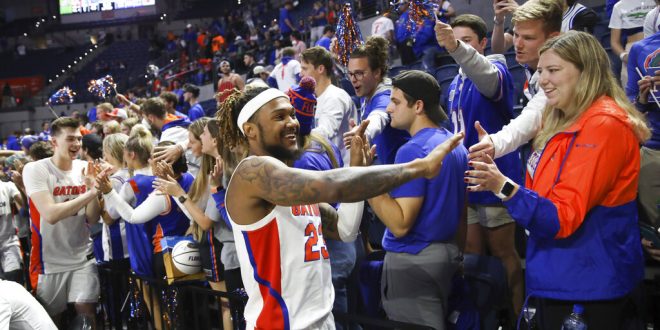 The 23rd ranked Florida men’s basketball team chomped down on the Troy Trojans on Sunday with an 84-45 win at home. The Gators improve to a 6-0 overall record as Florida continues to build on its impressive defensive identity.

Transfer guard Myreon Jones was the hero of the day, hitting four three-pointers in the first half to lead scoring for the Gators. Furthermore, two of those came in the team’s first three baskets.

Senior guard Tyree Appleby also gave 12 points for Florida with one rebound and one assist. Head coach Mike White talked about how Jones and Appleby have been building momentum for the team offensively.

Meanwhile, Transfer guard Phlandrous Fleming Jr. made his first start of the season and scored 11 points with six rebounds and two assists.

The Gators’ hot start to the season speaks to how the reworking of the roster via the transfer portal throughout the offseason is paying off. Sunday’s win marks the Florida men’s basketball team’s best start to a season in the Mike White era. The last time Florida opened a season with six straight wins was in the 2012-13 season.

White talked about how he was largely impressed by the team staying focused throughout the game.

On the other hand, he expanded upon what improvements the team will need to focus on moving forward to keep up the success.

Above all, White explained how the defense has been instrumental to Florida’s way of winning.

Up next for Florida men’s basketball

The Florida men’s basketball team will hit the road for a date with Oklahoma (6-1) on Wednesday night. Tip-off for the game is set for 8:00 p.m. at Lloyd Noble Center in Norman, Oklahoma.

Tori Edwards is a fourth-year Telecommunications student specializing in News with an outside concentration in Sport Management at the University of Florida. Tori works as an author and reporter for WRUF.com and is the voice of trendings on Wednesday mornings on ESPN 98.1 FM - 850 AM WRUF. You can reach Tori at victoriaedwards@ufl.edu.
@ToriEdwardsNews
Previous Billy Napier is the Next Head Football Coach of the Florida Gators
Next Costly Jaguar Mistakes Give Falcons The Win 21-14