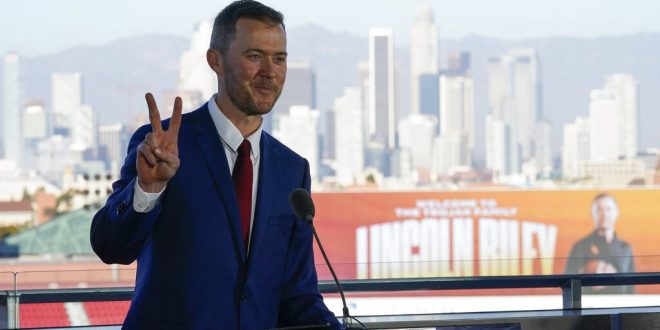 Riley: USC move is “Toughest Decision of my Life.”

Lincoln Riley lit the entire college football world on fire Sunday with his move to the University of Southern California.

The former Oklahoma coach is officially the No. 18 coach in Trojans history after an introductory press conference Monday. Here, the 38-year-old discusses his vision for the program, including his championship aspirations. Albeit, he expressed the difficulty of his decision. Specifically, the magnitude of leaving a program with the stature of Oklahoma.

A Return to Glory

It’s no secret USC has fallen critically behind with respect to other blue bloods. Since 2018, the program is 22-20, with only one season of bowl eligibility. Even further, the Trojans have fallen to No. 67 in 247 Sports.com’s recruiting composite, a far-cry from ranking No. 7 in 2021. So, Riley is aware of the uphill battle his staff faces. But, he’s confident he can turn it around quickly.

How does Riley plan such an upheaval? Simply put, the former Broyles Award winner is one of the sports’ premier recruiters. In the era of the transfer portal and early signing period, he has adjusted to effectively recoup talent throughout his time at Oklahoma. In 2021, he put together the No. 10 overall class, including the No. 2 overall quarterback Caleb Williams. Also, his eye talent has worked in the portal. In 2021, All-SEC running back Eric Gray left Tennessee to play for Riley in Norman, a move heralded for the Sooners. With that being said, the Trojans new head coach thinks there will be no drop off in his recruiting pursuits.

With strong recruiting, Riley plans to bring college football glory back to Los Angeles. Certainly, the coach believes he will put together the best roster in America. With that, he will aim for athletes who have similar championship aspirations. Once those pieces fall in place, the new coach believes there will be nothing holding the Trojans back from winning its first national championship since Matt Leinart wore the logo.

Surely, Riley’s move is shocking to say the least. Significantly, SEC Network’s Paul Finebaum says this is the biggest coaching switch since Urban Meyer went to Ohio State in 2011. Additionally, a move from one top tier program to another is so rare, especially for a program such as Oklahoma. Riley explains what drove him to the west coast.

There were a few key factors luring the heralded coach to SoCal. Chiefly, California, specifically the greater Los Angeles area, is a football recruiting hot bed. Highly-touted recruits such as Bryce Young and Kayvon Thibedoux are from California. With that, Riley will look to lockdown in-state talent, a strategy which propelled USC to back-to-back championships in the early 2000’s. Furthermore, he highlights the commitment from the University as a reason for the move. Evident from its pursuit of Riley, the Trojans administration seems committed to competing for championships.

The Trojans went 4-7 in 2021, so they will not be bowl eligible. However, the game with Cal was reschedule for Saturday, Dec. 4 at 11 p.m. For now, Lincoln Riley will focus on stringing together a class ahead of Dec. 15’s early signing period.

Sam Petosa is a Journalism major pursuing a Specialization in Sports and Media at UF. The South Florida native produces daily shows for WRUF, including "Sport Scene with Steve Russell, and "The Tailgate." In addition, Sam provides weekly sports updates for WUFT News and radio Sportscenter's for WRUF radio. Sam has been a writer at ESPN Gainesville since January 2020.
@sampetosa5
Previous Washington Takes Down Seattle on Monday Night Football
Next MLB Free Agency: New York Mets and Texas Rangers Land Big Fish 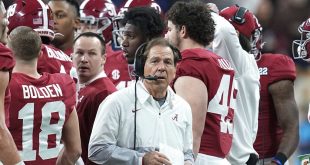