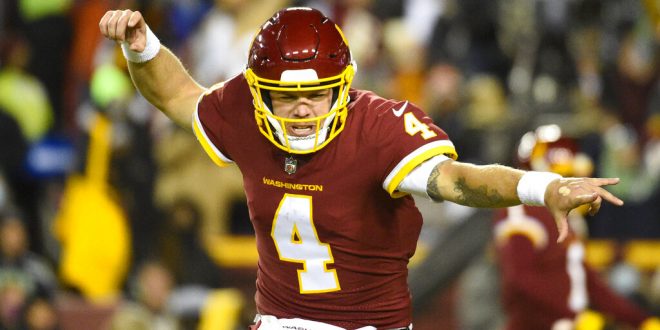 Monday Night Football was back in action last night as the Washington Football Team took on the Seattle Seahawks. In a late-game thriller, the Washington’s defense was able to come up big with interception of Russell Wilson on a two-point conversion.

The run game for Washington was extraordinary last night in the 17-15 victory. Lead back Antonio Gibson went for 111 yards on 29 attempts while J.D. McKissic had two touchdowns in the victory for Washington. Ron Rivera’s team moved to 5-6 on the year only 2 games back from the division-leading Cowboys after winning three straight. After a slow start, Rivera had this to say about his team moving forward.

Is this the permanent downfall of the Pete Carroll-led Seattle Seahawks? That question has to be on the minds of all Seahawks this morning. After a 10-6 record last season with a wildcard berth and overall dominance over the NFC West over the past decade. The Hawks are now projected a top 5 overall pick in the 2022 NFL Draft — if they owned that pick. In 2019, Seattle sent their 2021 and 2022 first-round selections to the New York Jets for Jamal Adams to bolster their defense.

No one questions trading first-round draft picks if you are winning. Ask the Rams.

While the defense sits at sixth in total defense, the offense ranks 31st in total yardage which explains some of their 3-8 record. Of course, some of those stats can be accredited to Seattle missing star QB and RB Russell Wilson and Chris Carson but to play devil’s advocate the Cardinals have continued winning. The Cardinals continue their dominance over the NFC while missing both Kyler Murray and DeAndre Hopkins; 9-2 is the best record in the NFL.

With only three selections in last year’s draft and six in this year’s with no first-rounders, people are going to start asking questions.

Expect the Russell Wilson trade rumors to heat up again later this off-season.

The Washington Football Team will take on the Raiders next week while the Seahawks take on the 49ers.

Ethan Sanabria is a second-year telecommunications student on the digital film and television production track at the University of Florida's College of Journalism and Communications. He has previously worked as a broadcaster for the Florida Flight basketball team and currently helps the production of WUFT news facebook lives. You can reach Ethan on any of his social media or at Ethansanabria@ufl.edu.
@ethansanabria
Previous Week 12: Around the NFL
Next Riley: USC move is “Toughest Decision of my Life.”