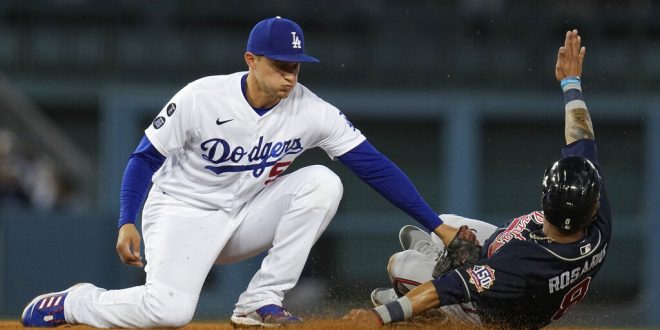 FILE - Los Angeles Dodgers shortstop Corey Seager, left, tags out Atlanta Braves' Eddie Rosario on an attempted steal during the third inning in Game 5 of baseball's National League Championship Series, Oct. 21, 2021, in Los Angeles. The Texas Rangers have reached an agreement on a $325 million, 10-year deal with Seager, according to a person familiar with the deal. The person spoke to The Associated Press on condition of anonymity Monday, Nov. 29, 2021, because the deal was pending a physical and wasn't finalized. (AP Photo/Ashley Landis, File)

While most people call New York the big apple, others like to say “It’s always bigger in Texas.”

This past Monday, two of baseball’s biggest free agents, Corey Seager and Max Scherzer ink deals to join new teams for this upcoming season and beyond.

Scherzer’s deal guarantees him $130 million over the next 3 years.

The Mets and Max Scherzer are finalizing a 3-year, $130M contract, per @JonHeyman pic.twitter.com/mdmkRqWuBl

Seager’s deal promises the young shortstop $325 million over the next 10 years.

Although deals are both massive, the size of Seager’s deal triumphs that of Scherzer’s and as aforementioned, “It’s always bigger in Texas.”

In 2020, when billionaire businessman Steve Cohen purchased a controlling interest in the Mets, the fate of the franchise changed forever. The organization stopped being a club content with playing second fiddle to the Yankees, and became a team focused on winning world championships.

Now, during the 2022 offseason, their focused has turned to pitching. That said, the goal to improve the teams starting rotation started very poorly.

After both he and his agent reached out the Mets and expressed interest in returning to the team, Steven Matz turned around and signed a four year $44 million contract with the Los Angeles Angels. Cohen was furious.

His response was to turn around and sign arguably the league’s second-best starting pitcher, Max Scherzer. Who is the only pitcher better? Jacob DeGrom, who is also on the Mets.

Shockingly, they weren’t done there. In addition to both Seager and Semien, the improved their starting pitching by signing Jon Gray. The former Rockies starter is set to make $56 million over the next 4 years.

Jon Gray will get $56 million over four years from Texas, pending a physical, according to a source.

There is no salary cap in baseball, for now. Both teams can continue to spend money as they please. The 2022 regular season begins on March 31.

William Silverman is a junior at the University of Florida from Philadelphia who is interested in pursuing a career in business, communications and journalism.
Previous Riley: USC move is “Toughest Decision of my Life.”
Next Miami Heat and Orlando Magic Both Lose on Monday Nights Games