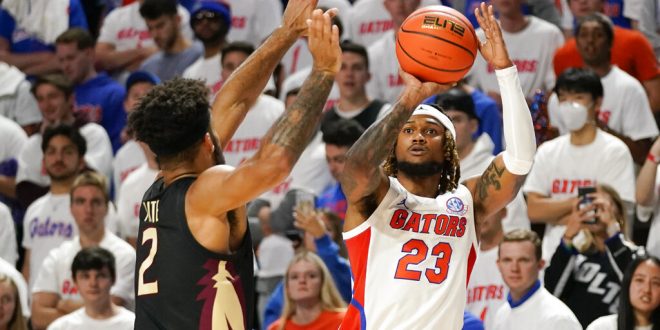 The Florida men’s basketball team falls to 6-1 on the year after losing at Oklahoma 74-67 on Wednesday night.

After moving to No. 14 in the AP Poll, the Gators drop their first true road test of the season. Despite a valiant effort, Florida led the game for just 34 seconds in the first half and another 21 seconds in the second half.

Using the home crowd to their advantage, the Sooners seemed to be in control for much of the game. Oklahoma jumped out to an early 9-0lead and kept Florida at bay from that point on for most of the game.

After a back-and-forth game, Oklahoma began to pull away late in the second half. With just over five minutes to go, they led by as much as nine. Although, this didn’t stop the Gators from making one final push. Backed by two Tyree Appleby three-pointers and an Anthony Duruji layup, Florida was down two with about 90 seconds to go.

A Jalen Hill and-one for the Sooners all but put this game away as Oklahoma and the home court were just too much for coach Mike White’s squad to overcome. A couple more turnovers and missed shots down the stretch put the nail in the coffin for the Gators.

It was a tough shooting night for the Gators. Even though he hit two clutch three-pointers late in the game, Appleby’s late-game three’s were his only two field goals on the night. As a team, the Gators shot just 4 of 24 from deep and 42.1% on the night.

Compared to their last game against Troy, Florida shot 13 of 37 from deep in that contest. This was far-and-away the worst shooting night from three-point range Florida has had this year.

Even with the poor shooting night, four Gators scored in double figures, Appleby (11), Brandon McKissic (11), Colin Castleton (14) and Phlandrous Fleming Jr. (17). In fact, Castleton posted his fourth double-double of the season adding 11 rebounds to go along with four blocks but did turn the ball over six times.

Looking at the Sooners, they were led by the aforementioned Jalen Hill (18), Umoja Gibson (15) and Tanner Groves who led the Sooners with 20 points and eight rebounds in just 27 minutes.

First-year-Sooner coach Porter Moser picked up his first win over a ranked team as Oklahoma’s head coach. Moser took on the job in April 2021 after 10 years at Loyola-Chicago. In fact, Moser picks up his 300th win as a head coach.

During his time with the Ramblers, and Sister Jean of course, Moser led the Ramblers to two NCAA Tournaments in a four year span, between 2017 and 2021, which included a Sweet Sixteen and Final Four. Now with the big-time program, this could be the first ranked win of many in Moser’s time with Oklahoma.

After the loss, the Gators return home for a match up with now-winless Texas Southern Monday. On the other hand, the Sooners will get yet another tough test as they take on Butler on December 7.  After tonight’s matchup, Florida has five more games before they open up SEC play.