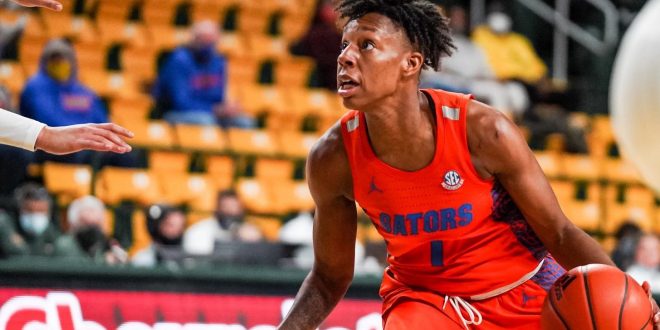 The Florida women’s basketball team (6-3) lost 75-71 in a thriller to the George Mason Patriots (6-3) on Wednesday. Amaya Scott led the Patriots in a dominant performance with 25 points on 10-of-17 shooting and nine rebounds. Kiki Smith led the way for the Gators with 19 points and six assists playing just minutes from her hometown of District Heights, Maryland.

The Gators came into the game riding a five-game winning streak after two wins in the San Juan Shootout. They couldn’t stay on a roll at George Mason, though.

This was a game of runs, as neither team could keep a firm lead for very long. The Gators opened up the action with an 11-3 lead, but Amaya Scott got started early, leading the Patriots to a 6-0 run to shake off the early jitters and make it a game again. She made eight of the Patriots’ first nine points and remained a key piece of their offense for the entire game.

Both teams traded blows in the first half, but the Patriots heated up late in the second quarter to take a 33-29 lead into halftime. Scott dominated inside the paint, tallying 15 points and six rebounds which opened up space for George Mason to shoot freely from the perimeter.

Tamia Lawhorne established herself as a threat from beyond the arc in the first half, sinking two threes.

Both teams battled closely in the third quarter, with Scott and Lawhorne proving to be a two-headed monster. Smith and Lavender Briggs kept the Gators in it, though, and they only trailed 61-58 with 4:25 remaining in the game.

Patriots guard Jordan Wakefield made a three-pointer with time dwindling down, though, and blocked a shot on the other end of the court to give George Mason a six-point lead with possession of the ball.

Briggs made a deep three-pointer, and Nina Rickards made two free throws to cut the deficit to 66-65, but the Patriots were able to convert on their free throws down the line to ice a 75-71 upset victory.

Ramifications for the Loss

With the loss, the Gators drop to 6-3 on the season. They’ll head to Fort Worth on Sunday for a match up against TCU before returning home for a three-game stint.

Meanwhile, George Mason has won three straight and will host Norfolk State next on Monday.

I'm a third-year student at the University of Florida passionate about storytelling and sportswriting. My goal is to work in communications for a professional sports team after I graduate.
Previous Tiger Woods discusses his future
Next Gators Men’s Basketball Team Drops First Game of the Year