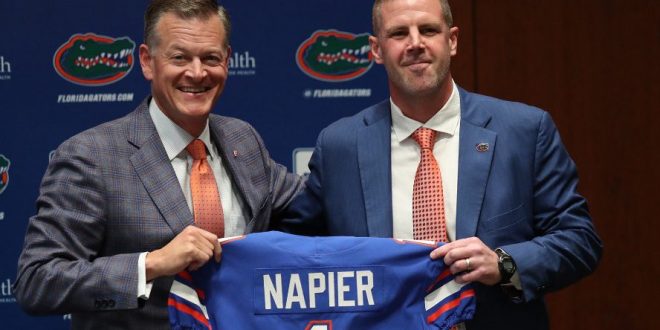 Florida’s new head football coach Billy Napier arrived in Gainesville on Sunday afternoon and got straight to work. Multiple coaching adjustments have already been made. It seems as if Coach Napier is looking for a fresh start and a clean slate for the Florida Gators.

Coach Napier signed a seven-year, $51.8 million contract. The deal starts at $7.1 million and will increase by $100k each year. The list of coaches that are not being retained by Coach Napier is growing by the day. Among this list are quarterback coach Garrick McGee, cornerbacks coach Jules Montinar and safeties coach Wesley McGriff. The Director of Student Athlete Development, Vernell Brown, is being retained.

As of right now, there are been four official additions to the football coaching staff.

The first official hire by Coach Napier was Coach Mark Hocke, the Director of Football Strength and Conditioning. Under Napier and Hocke, Louisiana had four-straight Sun Belt West Division titles.

Coach Hocke will replace Nick Savage, who served as the strength and conditioning coach for the past four years under Dan Mullen. He will also hold the title of associate head coach, carrying this title with him from the University of Louisiana at Lafayette.

Coach Hocke began his collegiate coaching career at the University of Alabama in 2009 under Nick Saban. In 2011, 2014 and 2015, Coach Hocke worked with Coach Napier at Alabama when Coach Napier was an analyst and wide receivers coach. In 2015, Coach Hocke served as the strength and conditioning coach at the University of Georgia and had a 15-person staff along with him. Coach Hocke also served on the strength and conditioning staffs at Florida State in 2016 and Texas A&M in 2017. He served as the strength coach at Louisiana from 2018 up until now. While numbers of Florida players pushed to “keep Coach Savage,” it is no surprise that Coach Napier wanted to keep his strength coach with him.

Coach Toney served as the safeties coach from 2018-2020 and the outside linebackers coach in 2021. He added defensive coordinator to his resume prior to the 2020 season. In 2020, the defense was ranked 31st in scoring defense and 33rd in total defense. This year, Coach Toney’s defense is ranked 11th in scoring defense and 36th in total defense. Toney’s defense tied for ninth in the FBS this season and led the Sun Belt Conference in points allowed her game (18.3).

Prior to Louisiana, he coached the safeties at UTSA from 2016 to 2017. While Coach Toney is only 31 year olds and has never coached at a Power Five school, Coach Napier seems confident in his abilities.

Coach Jabbar Juluke has also been added to the staff as the new running backs coach and associate head coach for the offense. He previously coached under Coach Napier with the same title.

Under Coach Juluke, Louisiana has been top four in the Sun Belt in rushing yards per game. In 2019, they held the number one ranking and sent two running backs to the NFL Draft. Elijah Mitchell and Raymond Calais were both coached by Juluke. Prior to Louisiana, Coach Juluke spent a year at LSU in 2016 and a year at Texas Tech in 2017. He has been credited with the success of All-SEC running back Derrius Guice at LSU, who went on to be a second-round pick the following year.

The Gators have also welcomed Coach Ryan O’Hara as the new quarterbacks coach. Coach O’Hara previously served as the assistant quarterbacks coach at the University of Louisiana and added offensive analyst as his title in 2020.

During his time at Louisiana, he contributed in the development of Levi Lewis. Lewis was named the 2021 Sun Belt Conference Championship Game MVP.

Before Louisiana, Coach O’Hara was the offensive coordinator and wide receivers coach at Alabama A&M University in 2016 to 2017. Before this job, Coach O’Hara coached quarterbacks at Mt. San Antonio College and Santa Monica College.

Coach Napier wasted no time in working towards bettering the football program at the University of Florida and has already started visiting with recruits.