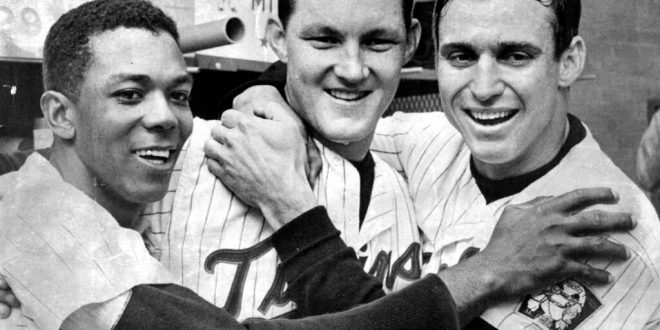 From left to right, Minnesota Twins' Tony Oliva, Jim Kaat and Bob Allison celebrate early Oct. 7, 1965, after defeating the Los Angeles Dodgers in Game 2 of the World Series, in Bloomington, Minn. Former Twins teammates Oliva and Kaat have been selected to the baseball Hall of Fame, on Sunday, Dec. 5, 2021. (William Seaman/Star Tribune via AP)

There are six former players that have been elected as new inductees to the Major League Baseball Hall of Fame. Gil Hodges, Jim Kaat, Minnie Miñoso and Tony Oliva were part of the Golden Era Ballot that was selected by the committee. Bud Fowler and Buck O’Neil were selected by the committee as part of the Early Baseball Era Ballot. These six players will be enshrined into the Hall of Fame in Cooperstown, New York on July 24, 2022.

Buck O’Neil was of the most prominent players in the Negro Leagues. O’Neil first appeared in the League with the Memphis Red Sox in 1937. One year later, O’Neil was a member of the Kansas City Monarchs where he played first base. As a member of the Monarchs, O’Neil was a key player who helped the Monarchs win four straight Negro American League Pennants. According to MLB.com, there are no official records of stats from the Negro Baseball League, but there are stats compiled from various souces. The stats that were gathered for Buck O’Neil states that he had 339 hits in 1,299 at bats for a .261 batting average. 11 of these hits were home runs and he accounted for 184 RBIs. Lastly, O’Neil scored 201 runs and stole 47 bases.

Buck O'Neil is an icon.

And now he's in the National Baseball Hall of Fame. pic.twitter.com/2CiYZURDlY

Bud Fowler is the other player that was elected to be in the Hall of Fame by the Veterans Committee. Fowler became the first professional baseball player in 1878 and had a career that span 30 seasons. He primarily played as a pitcher and catcher throughout his illustrious career. Fowler also played for more Minor League clubs and games before Jackie Robinson broke the color barrier in the MLB. At the end of his career, Fowler had approximately 2,000 at-bats and hit over .308.

The four Golden Days Era players that have been selected to Cooperstown are Gil Hodges, Jim Kaat, Minnie Miñoso and Tony Oliva.

From the Golden Era Ballot, Gil Hodges, Jim Kaat, Minnie Miñoso and Tony Oliva have been elected to the National Baseball Hall of Fame. pic.twitter.com/WkrbXrPKw4

Gil Hodges played for the Brooklyn Dodgers and was still a member when they moved to Los Angeles. As a member of the Dodgers, he helped the franchise win 5 NL Pennants and the 1955 World Series. Hodges finished his career with the New York Mets before retiring in 1963. He then was a manager of the Washington Senators from 1963-1967. After leaving Washington, Hodges then became the manager for New York Mets from 1968-1971. He finished his career with a .273 batting average with 1,921 hits. He also hit 370 home runs, batted in 1,274 runs and stole 63 bases.

Minnie Miñoso was the first Black Cuban to suit up for the Chicago White Sox on May 1, 1951. Miñoso won the 1951 AL Rookie of the Year and was a nine-time all-star in his career. He also won three AL Gold Gloves as a left fielder. Miñoso was a big play threat as he lead the AL in triples and stolen bases on three separate occasions. He then finished his career with 2,110 hits and a .299 batting average.

Newly elected members, Jim Kaat and Tony Oliva were teammates on the Minnesota Twins. Kaat was a pitcher who played from 1959-1983 with 12 of those seasons coming with the Twins. Kaat compiled a record of 283-237, and he also recorded 18 saves. He struck out 2,461 batters and a 1.26 WHIP (walks plus hits per inning pitched). However, his most impressive feat was winning 14-straight AL Gold Gloves from 1962-1975.

On Tuesday night, Lomas Brown will be inducted into the College Football Hall of Fame …