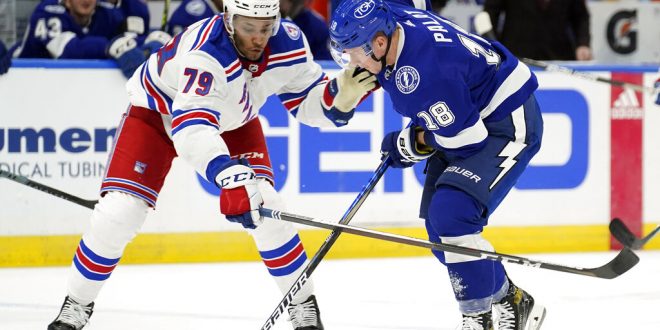 After losing three straight games, the Lightning, with help from Ondrej Palat bounced back with a dominating 7-2 victory over the Columbus Blue Jackets Tuesday night. Palat contributed on three of the team’s goals.

At 30 years old, the Lightning winger has amassed 400 career points. That ranks him at seventh in the Lightning’s all time points leaders. He is also top ten in all time goals and all time assists for the Lightning.

In Tuesday’s game against the Blue Jackets, Palat scored twice and assisted one goal. His two goals were the team’s first two scores off the assist from Brayden Point. His second goal was his 400th point.

So far this season Ondrej Palat has 27 points from 12 goals and 15 assists.

How the win happened

The Tampa Bay Lightning scored seven goals in their win against the Columbus Blue Jackets Tuesday night. That ties the team’s season high that they achieved against the Red Wings October 14, the second game of the season, and the Canadiens on December 5.

Defenseman Victor Hedman recorded one assist in the game which pulls him alongside Adam Fox of the New York Rangers for most points by a defenseman this season.

What’s next for the Bolts?

The Lightning sit atop not only the Atlantic Division, but the whole NHL with 49 points on 22 wins and five overtime losses. That is just one point ahead of the division rival Florida Panthers.

On Thursday, the Lightning will play host to the Calgary Flames who have played just three games since December 11.

Jensen Young is a journalism student at the University of Florida. He works as a sports writer for WRUF.com and is the voice of trendings on Wednesday mornings on the WRUF radio station.
@Jensen_Young9
Previous Alabama faces tough road test against Florida
Next Gator Football Update